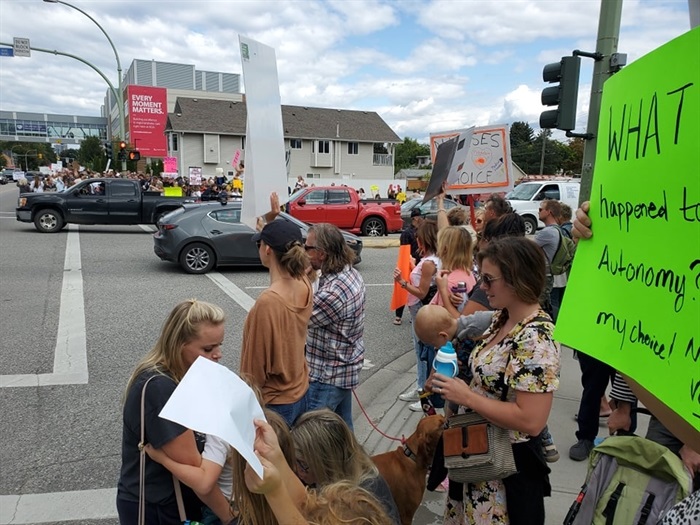 From hate mail to pizza: why are protesters targeting the media? | infonews

The Radio NL 610 AM building where he works was also vandalized and threats were made inside the station.

One morning, radio station staff arrived at work and found a poster taped to the front door showing people being executed on the gallows.

Oddly enough, several large pizza orders were delivered to the radio station, leaving the staff to either pay for the unwanted order or send it back and let the local business pick up the cost.

“It’s not just here, it’s everywhere, anyone who writes a story about COVID (could) find themselves potentially hated,” he said.

And Mineer is far from alone.

iNFOnews.ca reporter Carli Berry was reprimanded by anti-vaccination protester Bruce Orydzuk last summer. She started filming him and he then turned his aggression on the security guard who stepped in to help him, unleashing a barrage of racial slurs.

iNFOnews.ca journalists have been shouted at and intimidated while covering anti-pandemic protests.

CBC recently released a article describing the amount of abuse its reporters across the country have received.

And all over the world, journalists have been threatened and even attacked in EuropeUnited States and Australia.

Almost 12 months ago, protesters changed course and began gathering outside the offices of Castanet and the Daily Courier newspaper in Kelowna.

Which brings us to the question: why are protesters targeting the media?

“If the media is constantly telling you that everything you believe is wrong, then what happens is you don’t think you’re wrong, you think the media is wrong,” the professor told iNFOnews. in journalism from the University of British Columbia, Dr. Alfred Hermida. California. “So they attack the media.

The media professor pointed to the ongoing protests in Ottawa.

Originally the organizers said it was a protest by truckers, but when the media pointed out that the truckers’ association had said they wanted nothing to do with it, and that 90% of truckers are vaccinated, this undermines the message of the protesters.

Anyone who has walked past an anti-COVID protest will have seen “The media is the virus” signs as well as signs with slogans that do not reflect reality.

University of Victoria journalism professor Sean Holman said the rejection of evidence and the way it has seeped into politics is why protesters are targeting the media.

“It makes perfect sense when the main dividing line in politics is whether or not you accept the evidence,” Holman said. “They would be protesting strongholds of evidence, like the news media.”

While anti-COVID protesters have been spreading misleading or false information, the media verifying the details and pointing out that they are incorrect does not sit well with them.

Holman said journalists and news media being the standard-bearers of evidence, they then become targets for protesters.

But Holman said part of the problem lies with the journalists themselves and the way the media operates.

“It’s hard to come to a conclusion based on evidence, especially when you’re on a deadline, sometimes it’s easier to quote both sides, add them, and no matter who is telling the truth, the public can sort that out,” he said. “We haven’t always been as diligent as we should be in determining what’s truthful and what isn’t.

And Holman doesn’t like where the rejection of evidence is taking society.

“A lot of our system is based on this idea that evidence matters, and there’s a huge destabilization for that idea,” he said.

And why are they so angry and often aggressive?

Hermida has an answer.

“When people don’t feel heard and listened to and they feel marginalized, they fall back into a corner because they have no choice but to honk their horns 24/7 and you feel that anger,” he said.


READ MORE: Kelowna school board president may be the most harassed in BC by anti-vaxxers


To contact a reporter for this story, email Ben Bulmer or call (250) 309-5230 or email the editor. You can also submit photos, videos or news tips at the press room and be entered to win a monthly raffle.


We appreciate your comments and opinions on our stories, but play well. We will not censor or delete comments unless they contain off-topic statements or links, unnecessary vulgarity, false facts, spam or obviously fake profiles. If you have any concerns about what you see in the comments, email the editor in the link above.