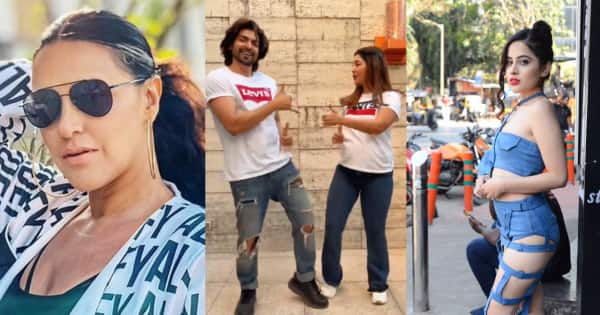 After five years of association with the reality show Roadies, Neha Dhupia has decided to leave the series. She will no longer be the series’ gang leader. A video of Debina Bonnerjee performing on Kacha Badam with husband Gurmeet Choudhary has gone viral on social media as we get a glimpse of her cute baby. Bigg Boss OTT fame Urfi Javed has made headlines again as she was trolled for her bizarre dress sense. Apart from these stars, many other TV celebrities have turned out to be the newsmakers of the day. Scroll! Read also – Urfi Javed trolled for his “weird” denim outfit; netizens call it a fishing net – watch

Neha Dhupia leaves Roadies
After being associated with the show for nearly five years, Neha Dhupia has ended her Roadies journey. She decided to leave her position as gang leader. The news comes after Rannvijay Singha decided to quit the show as host. Read also – Kyunki Saas Bhi Kabhi Bahu Thi: Ekta Kapoor’s show with Smriti Irani returns to the small screen; fans are super excited about it

Preggers Debina Bonnerjee does Kacha Badam
As an anniversary special, Debina Bonnerjee and her husband Gurmeet Choudhary created a reel on Kacha Badam. It was the cutest reel as fans got a glimpse of Debina’s sweet baby bump. Check it out below: Read also – Roadies season 18: After Rannvijay Singha, Neha Dhupia LEAVES reality TV; reveal why

Ekta Kapoor announces the return of Kyunki Saas Bhi Kabhi Bahu Thi
Kyunki Saas Bhi Kabhi Bahu Thi with Smriti Irani and Ronit Roy remains one of the most popular shows on Indian TV and the good news is that it is coming back to TV. Ekta Kapoor took to her Instagram account to make the announcement. She wrote, “Is promo ki ek jhalak dekh kar hi saari puraani yaadein tazaa ho gayi. Today, looking back, I remember every memory, every moment that made this show one of the most loved! Usi pyaar ke saath judiye is safar se dobaara. Budhvaar se, harr roz, shaam 5 baje, sirf StarPlus par.”

Urfi Javed gets trolled for weird clothes
Bigg Boss OTT fame Urfi Javed has once again made headlines for his bizarre choice of clothes. She donned a denim dress with multiple cutouts and fans definitely don’t seem to approve of her clothing choice.

Rakhi Sawant talks about her breakup with her husband Ritesh
It was recently that Rakhi Sawant announced her separation from her husband Ritesh. In a final interview with Etimes, Rakhi revealed that it was Ritesh who decided to go their separate ways. She also mentioned that she will wait for him for a year. She said: “It happened yesterday around 3pm. But I didn’t call it off. It was his decision. He was with me on Friday, all the way through. We woke up on Sunday very normally. Suddenly he started packing his bags and said he wanted to part ways with me because his legal issues (read: with his wife) got too big God knows who he talked to during those morning hours that brought him to take this step.