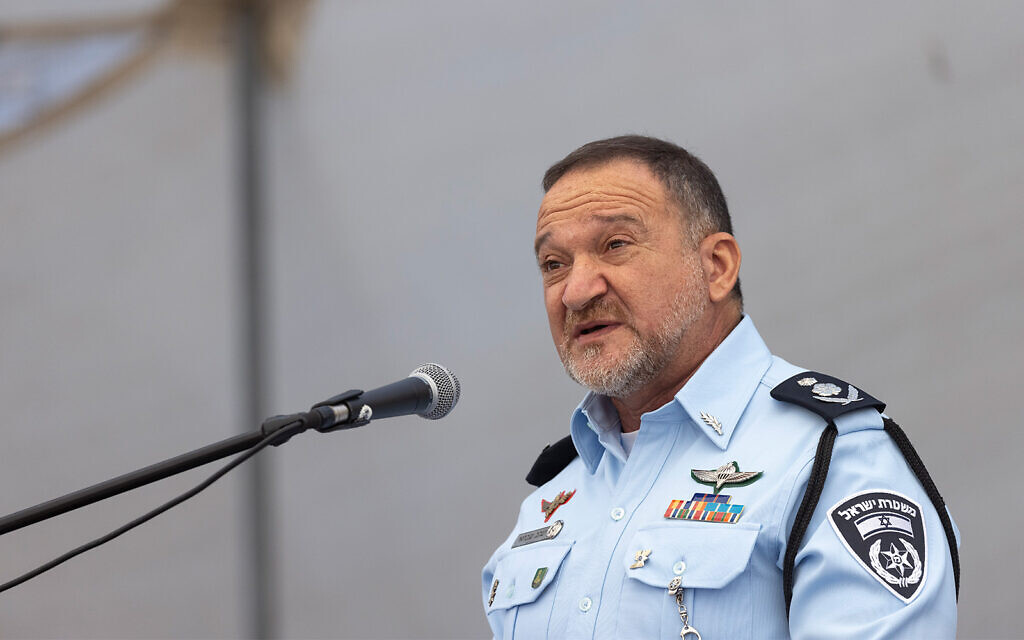 Israel Police Commissioner Kobi Shabtai slammed the media and spoke out about law enforcement on Tuesday after a team of investigators refuted allegations that police illegally spied on Israeli citizens.

Speaking at a Border Patrol cadet graduation event on Tuesday, Shabtai said the report had caused “unprecedented” damage to public trust in the police, calling for soul-searching in his wake.

“The ease with which the entire police force was slandered must be taken into account,” he said. “The Israel Police have been hit with serious false allegations that have seriously damaged public trust, not only in the police, but in all law enforcement agencies.

“Fake news has managed to seep into the mainstream media and cause great damage that will take a long time to repair,” Shabtai added.

Earlier this month, the Calcalist newspaper published an explosive unsourced report claiming that police had spied on dozens of prominent figures. Reports indicate that the police used the powerful Pegasus spyware from surveillance firm NSO Group to gain access to the phones, without judicial supervision.

A Justice Department investigation into the allegations released interim findings on Monday saying there was “no indication” such a hack took place.

An internal police investigation and vetting by prosecutors in Netanyahu’s corruption trial also found no evidence of widespread wrongdoing.

Shabtai said the prosecution’s investigative team “left no stone unturned” to verify the allegations and received “full cooperation” from the force.

He lambasted the media for the reports. Calcalist has come under increasing criticism for the explosive and pressured report to reveal its sources. The journalist, Tomer Ganon, said on Saturday that he had “checked the facts” and pledged to protect his sources.

The spying allegations and the resulting fallout were widely reported in the Israeli media. Calcalist said Monday it would investigate its own reporting.

An illustration of a man holding his phone with the NSO Group logo on a computer screen in the background, in Jerusalem, February 7, 2022. (Yonatan Sindel/Flash90)

Police, including current and former leaders, have consistently denied any widespread and unsupervised hacking. They admitted mistakes in accessing the phone of a key witness in the Netanyahu corruption case.

The tentative findings released Monday are the result of an investigation led by Deputy Attorney General Amit Marari, with help from Shin Bet and Mossad investigators. According to the details of the investigation, there is no indication that the Israeli police used Pegasus without a court order to infect the phone of any of the lists of people published in the media.

Additionally, a Department of Justice statement noted that the investigation did not uncover any failed attempts by police to use Pegasus without judicial review, nor did they uncover any use by the police other similar spyware against named individuals.

Marari noted that the police informed the Ministry of Justice that three people were the subject of a court order authorizing such phone hacking, but that only two of them had been targeted by the spyware and that only one of them had been successfully hacked.

The Justice Department’s statement on the investigation said its investigation would continue and expand to include people not on the original Calcalist list.

Justice Minister Gideon Sa’ar said on Tuesday the information was “incorrect” and there was no need for a government or state investigation into the matter.

Public Security Minister Omer Barlev, who oversees the police, said Marari’s report was a “resounding acquittal for the Israel Police and for those in uniform.”

Barlev added that there are many people who “need to bow their heads and apologize” to the police “whose names have been smeared in the mud at every step in recent weeks.”

If so, we have a request.

Every day, our journalists aim to keep you up to date with the most important developments that deserve your attention. Millions of people rely on ToI for fast, fair and free coverage of Israel and the Jewish world.

We care about Israel – and we know you do too. So today we have a question: show your appreciation for our work by join the Times of Israel communityan exclusive group for readers like you who appreciate and financially support our work.

yes i will give

yes i will give

Already a member? Log in to stop seeing this

You are a dedicated reader

We’re really glad you read X Articles from The Times of Israel over the past month.

That’s why we started The Times of Israel ten years ago – to provide discerning readers like you with must-read coverage of Israel and the Jewish world.

So now we have a request. Unlike other media, we don’t have a paywall in place. But since the journalism we do is expensive, we invite readers to whom The Times of Israel has become important to help support our work by joining The Times of Israel community.

For just $6 a month, you can help support our quality journalism while benefiting from The Times of Israel WITHOUT ADVERTISINGas well as access Exclusive Content only available to members of the Times of Israel community.

Thank you,
David Horovitz, founding editor of The Times of Israel

Already a member? Log in to stop seeing this