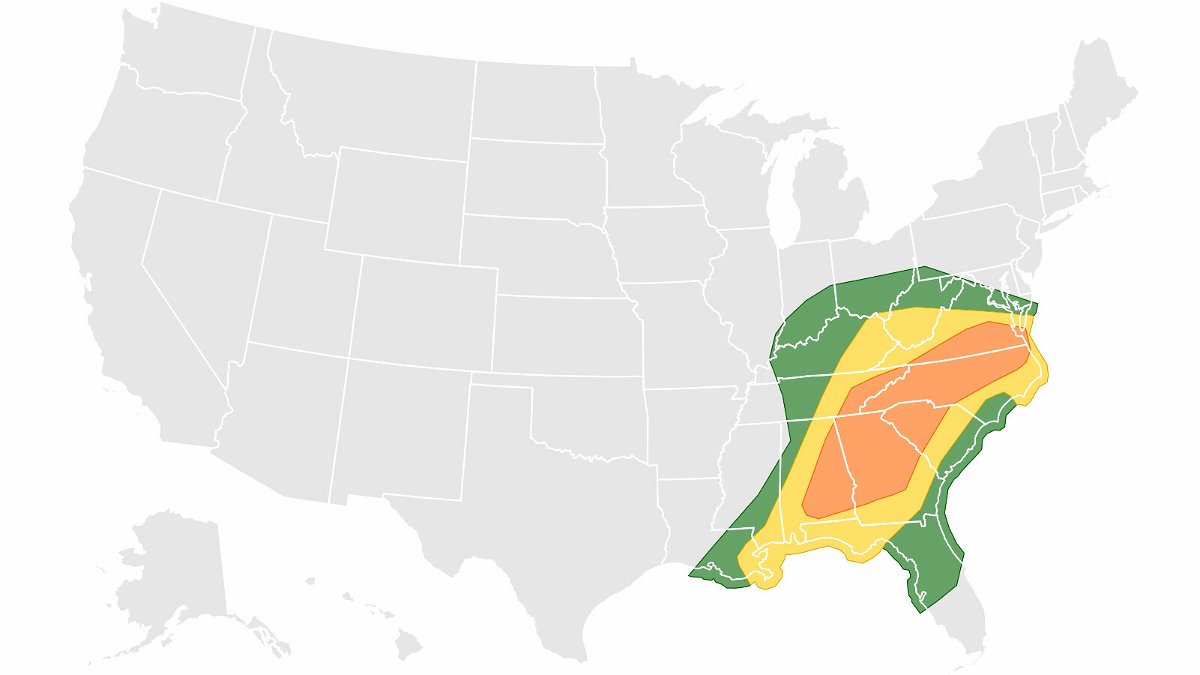 Two tornadoes were reported in central North Carolina on Friday afternoon, making it the ninth straight day with tornadoes somewhere in the United States.

In the town of Mebane – between Greensboro and Durham – a tornado hit the Gildan distribution center, but none of the 30 people inside were injured, according to the Orange County director of emergency services , Kirby Saunders.

Some homes about a mile away also sustained damage from the same storm, he added.

The National Weather Service Storm Prediction Center said both tornado reports showed damage in the area where the distribution center is located and in a neighborhood just to the northeast.

“Everyone is accounted for. Right now we are securing utilities and getting ready for the second round,” Saunders said.

There are more than 100,000 customers in four southern states without power tonight as storms move through the region, according to tracking website PowerOutage.US.

Currently, Tennessee is seeing the most outages with nearly 36,000 customers in the dark. Significant outages are also reported in North Carolina, South Carolina and Georgia.

Tornado watches were displayed for residents of parts of North Carolina, Virginia, and West Virginia.

A tornado watch means conditions are favorable for storms to form in the area to produce tornadoes.

Several major southern metropolitan areas face the threat of damaging winds, hail and a few tornadoes, with the weather targeting 55 million people in the southeast and mid-Atlantic.

Anticipate the storm: Sign up for weekly email updates from CNN weather forecasters

The cities of Charlotte and Raleigh in North Carolina, and Virginia Beach and Norfolk in Virginia, are all at increased risk from severe storms – level 3 out of 5.

This level of risk means that many severe storms are possible in the region.

The Storm Prediction Center said the main threat is expected to continue through the evening before subsiding overnight.

Heavy rains of up to three inches will create a threat of flooding in the mid-Atlantic.

“Rainfall totals of up to 3 inches are possible and could create scattered flooding issues in these areas,” the WPC said.

Flood watches are posted for parts of six states from Kentucky to Maryland, including Washington, DC and Baltimore as well as other cities.

On Saturday, the storm system will move slowly off the East Coast.

“This will lead to a very gloomy weather pattern that will develop and persist in parts of the northeast and in the mid-Atlantic throughout the weekend,” the Weather Prediction Center said. “Much of the east coast will be under the influence of overcast skies, gusty northeasterly winds and occasional rain with high temperatures only reaching the 50s.”

It’s a stark contrast to the 100-degree temperatures forecast for Texas and the Southern Plains this weekend.

CNN’s Jamiel Lynch and Hannah Sarisohn contributed to this report.