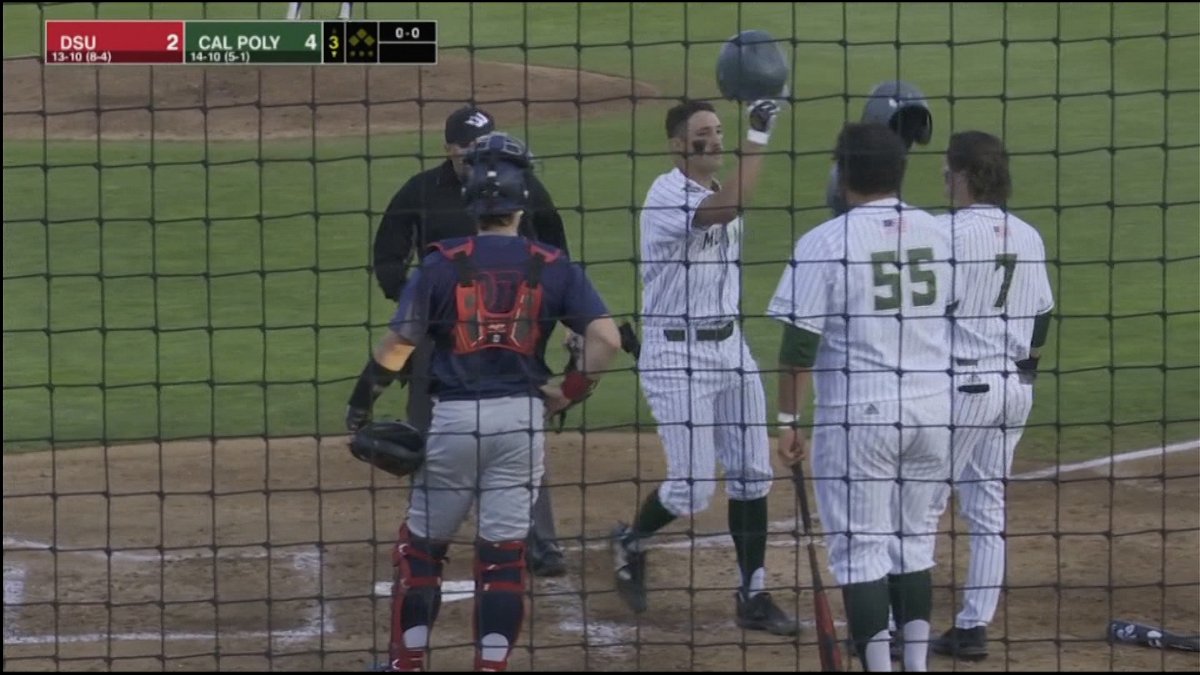 SAN LUIS OBISPO, Calif. — Drew Thorpe struck out nine of seven innings for his fourth win of the season and Collin Villegas led in two runs with a single, double and triple as Cal Poly opened its non-conference baseball streak of four games against Dixie State with a 12-3 win Friday night inside Baggett Stadium.

Thorpe (4-0) allowed an unusual five walks, matching his career high against USC and CSUN a year ago, but scattered four hits in the 108-pitch performance. The only runs he allowed came on a two-run homer from Will Chambers, his first of the season, in the second inning.

The blast gave Dixie State a 2-0 lead, but Cal Poly responded with two in the bottom of the second, five in the third and four in the sixth to turn the tide.

Winning its third straight game and eighth in nine games, Cal Poly improved to 15-10 for the year, climbing five games above the .500 mark for the first time this season. Dixie State, playing Cal Poly for the first time and in its second year transitioning to Division I, fell to 13-11.

Villegas raised his average to .299 with a first double to start the second-inning two-run rally, a single to right-center field in the third-inning five-run heave and a two-run triple off the field wall. from center left in the sixth from four points.

Nick Marinconz contributed three singles and an RBI as he hit .372 for the season, going 10 for 22 (.454) with two doubles and four RBIs in his last six games, while Joe Yorke added two singles and an RBI like Cal Poly with Dixie State 15-6.

Tate Samuelson added two singles and a double for two RBIs while Brooks Lee scored his fifth homer of the season, a two-run shot to right field, in the third inning, extending his hitting streak to 14 games. Lee has 31 RBIs for the year. Matt Lopez contributed with a single, a sacrifice fly and a scoring groundout.

Brett Porthan (5-1) suffered his first loss of the season, allowing 10 runs (seven earned) and 10 hits in 5 2/3 innings while walking one and four strikeouts.

After Thorpe at the mound, a pair of relievers from Mustang made their season debut. Bryce Warrecker, sidelined by injury, retired the Trailblazers in the order in the eighth inning with just 10 pitches on a groundout and two fly balls to the outfield while Sebastian Kirchner, a transfer from Folsom Lake Community College , retired a two-in-one run in the ninth inning performance.