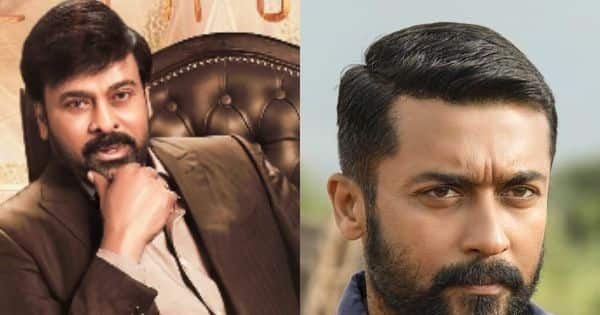 The big news is that the makers have unveiled the Godfather teaser. The movie is the official remake of Lucifer. Suriya started her 42nd film with Siva. Here’s a low point… Also Read – Move To Bollywood, Telugu Film Industry Had Horrible 2022 Box Office: Find Out How Prabhas, Ram Charan, Ravi Teja Made Distributors Cry

Chiranjeevi’s godfather teaser is here
One of Chiranjeevi’s most anticipated films is Godfather. This is the Telugu remake of Lucifer. The film is directed by Mohan Raja. Today, the teaser for the film was unveiled. One of the highlights is the fact that Salman Khan shares screen space with Chiranjeevi in ​​a cameo. The film also stars Nayanthara and Satya Dev. The teaser has made us even more excited for the trailer which should be released soon. ALSO READ – Laal Singh Chaddha: Will Aamir Khan refund distributors money for box office loss? Rajinikanth, Shah Rukh Khan and other stars who did the same

Suriya 42 kicks off with a pooja in Chennai
Tamil superstar Suriya’s 42nd film kicked off with a pooja in Chennai. The film is meant to be mass entertainment. Disha Patani was roped in by the makers as its leading lady. Siva is going to direct the film. Devi Sri Prasad came as a music composer. They will shoot in Goa for almost a month for this film. ALSO READ – Shah Rukh Khan in Laal Singh Chaddha, Ram Charan in Kabhi Eid Kabhi Diwali and more: List of INTERESTING and EXCITING Cameos in Upcoming Bollywood Movies

Korean group Tri.Be part of Allu Arjun’s advertisement
Armaan Malik has revealed that the new Coca Cola ad featuring Allu Arjun will be a mix of Hindi, Telugu and Korean. Yes, the Tri.Be girl gang is going to be in the song.