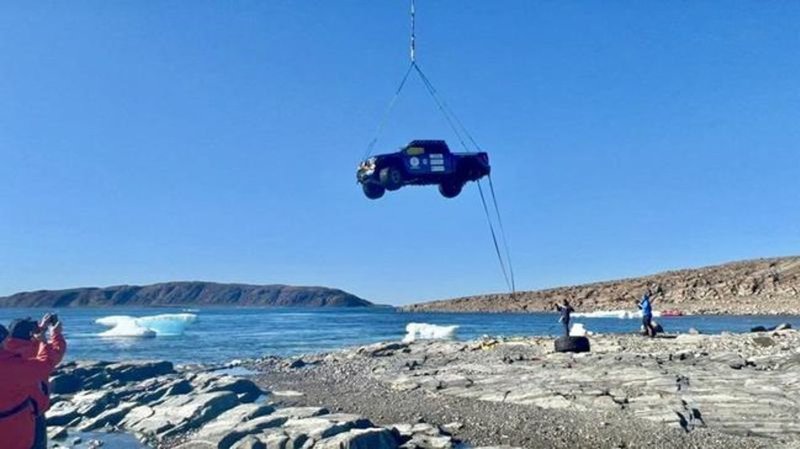 Comie-Picard said the strong current and the depth to which the truck sank made the mission particularly difficult. He said that at one point the diver had to swim about seven meters against a current that was about six to eight km/h.

“We could hear him breathing on the radio, working so hard,” Comie-Picard said. “This poor guy is broken now, just exhausted.”

After the truck was airlifted, Comie-Picard said he spent another night on the island to ensure the area was cleared. Local hunters who assisted in the effort showed him where historic Inuit camps, meat stores and fishing lines were located.

“It was actually quite powerful to be on the pitch like people used to be,” he said.

He added that it was a “great privilege” to develop ties with the Inuit and gain a better cultural understanding of the region.

The sunken truck was part of the TransGlobal Car Expedition, where a 16-person team from Canada, Russia, Ukraine, the United States and Iceland completed a 2,200 kilometer journey from Yellowknife to Resolute, Nvt. , in March.

The expedition team said it was the world’s first wheeled land crossing between Canada’s continental shelf and the High Arctic. It was also a pre-run of a section of a longer earth journey to circumnavigate the planet scheduled for 2023-2024.

The expedition made international headlines when a plane with two Russian team members ran aground in Yellowknife. Canada had closed its airspace to Russian-owned or operated planes in February due to Russia’s attack on Ukraine.

Two pilots and the Russian who chartered the plane were each fined $3,000, while the Geneva-based aircraft operator was fined $15,000 for violating aviation regulations Canadian.

The truck fell through the ice on a return trip to Cambridge Bay, Nvt., on March 23. Comie-Picard, who was in Resolute at the time, said the two people inside were able to escape through the passenger side door.

They were safe and sound, but left in their socks in the freezing cold. He said it was a “traumatic and difficult night” as team members waited until daybreak in another truck.

Comie-Picard said that due to the current, the ice where the truck broke through had thinned to 15 centimeters in thickness from 60 centimeters five days earlier when the team initially traveled the area.

The truck, which Comie-Picard says is nothing more than scrap metal, will travel to Montreal by the next available sea transport.

This report from The Canadian Press was first published on August 31, 2022.

— By Emily Blake in Yellowknife

This story was produced with the financial assistance of Meta and the Canadian Press News Fellowship.