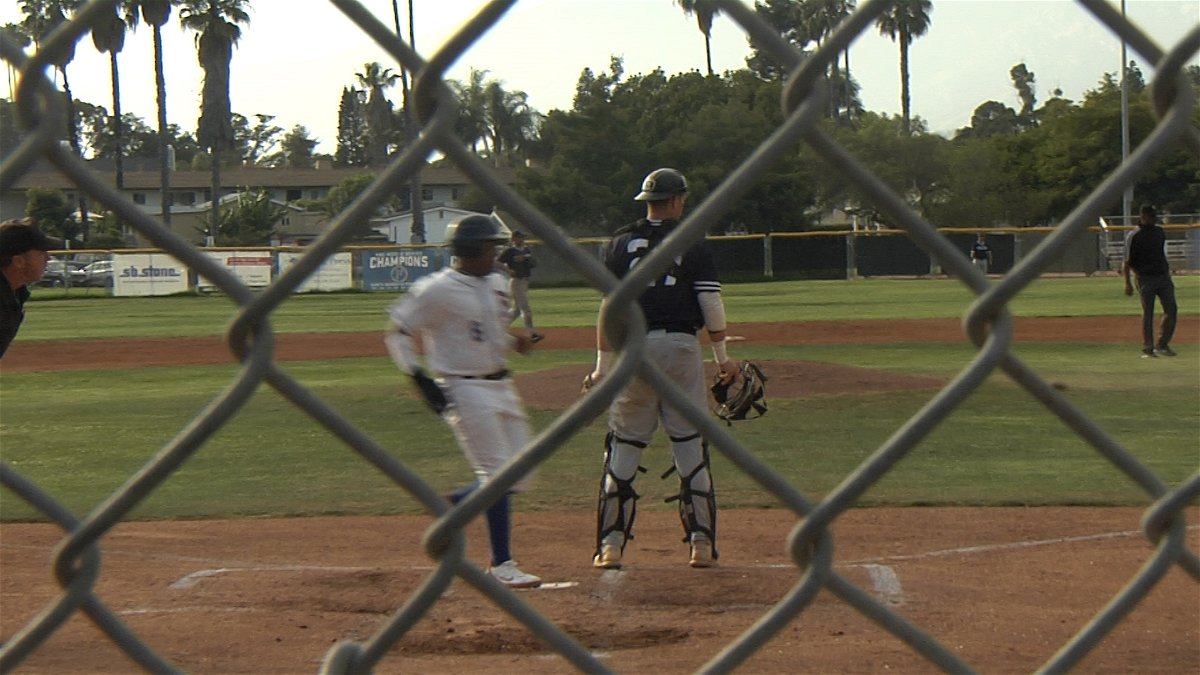 SANTA BARBARA, Calif. — In a game littered with oddities, it ended up being the most normal result: a 7-3 Foresters win over the Oaks on The Independent Night at Pershing Park. A three-run seventh for Santa Barbara opened a tight game, and the Foresters added key insurance runs for the final margin.

As for quirks, how many times have you seen referee interference? Or a 4-6 out on a fly ball to right field? A run scored on a strikeout? Or have six straight runners reaching base. . .but only two points? But that’s the joy of baseball; every time you come to the park, you never know what you are going to see.

“I thought it was the second game in a row that we played really well,” noted manager Bill Pintard. “We got critical hits in critical situations. Pinched hitters came through, we stole bases, we walked more than we hit. We had a lot of good swings on the ball all night.

Tied 2-2 in the crucial seventh, the Foresters lived up to their saying of “two hits to win championships.” After Miguel Santos doubled, Kevin Bazzell doubled with two outs to give the Sters a 3-2 lead. After Griffin Everitt was hit by a ptich, RBI machine Gavin Kash (pictured) hit a two-run single to make it 5-2.

“I love seeing Kash find men on base, but our best hitter is No. 4 Bazzell,” an elated Pintard said. “For the second night in a row, he was given the RBI green light. I can’t believe they throw it to him unless they have to; I was walking him. It does damage. »

Santa Barbara added a pair of insurance runs in the eighth. One came on a sack fly by pinched hitter Tanner O’Tremba, and the other scored when Dylan Campbell batted in, but the pitch eluded the catcher, allowing Santos to drive home from third.

Amidst all the weirdness was a decent start by Robert Cranz. The Sters right-hander threw five two-run innings, striking out seven and allowing just one hit, though he walked three and hit a batter. Luke Harrison made his Foresters debut and pitched two scoreless innings.

Reaching the 2-2 draw after three took a bit of time. After allowing a run in the first on an error by Kade Higgins, the Foresters nearly opened play as their first six batters reached base late in the inning. However, after doubling up, Miguel Santos was knocked out. Bazzell led Dylan Campbell for the Foresters’ first inning. A few batters later, as Gavin Kash brought Bazzell home with the second run, Griffin Everitt was brought down to the plate on a solid pitch from the left fielder. It could have been more runs, but the first set ended with the Sters leading 2-1.

After the Oaks tied the game in the third after a first walk on a brace, the Foresters suffered a bizarre fourth inning. Kade Higgins was hit by a lead shot. A short pop from Kyle Casper on the right ended up falling, but Higgins had to wait and was kicked out in second. Then with Josh Stinson standing, Casper attempted to steal. The catcher’s pitch sailed to the center, but the umpire then called the play off on a very rare ‘umpire interference’ call. Apparently, Blue at home accidentally got in the way of the receiver while he was throwing, which led to the error. Recalling the former, Casper watched Stinson and Santos exit. A promising round fizzled out in the strange.

The ninth inning was a little exciting, as the Oaks charged with one out. But Grant Stevens and then Chase Webster got a big strikeout, before second baseman Austin Stracener made a late game-saving play by moving to his right at second base to put the team out and end the game.

More excitement is in store — and you never know when you’ll see something you’ve never seen — when the Foresters take home Friday at 6 p.m. against the Arroyo Seco Saints. Tune in to AM 1290 or FM 96.9 to catch the action if you can’t be here in person.