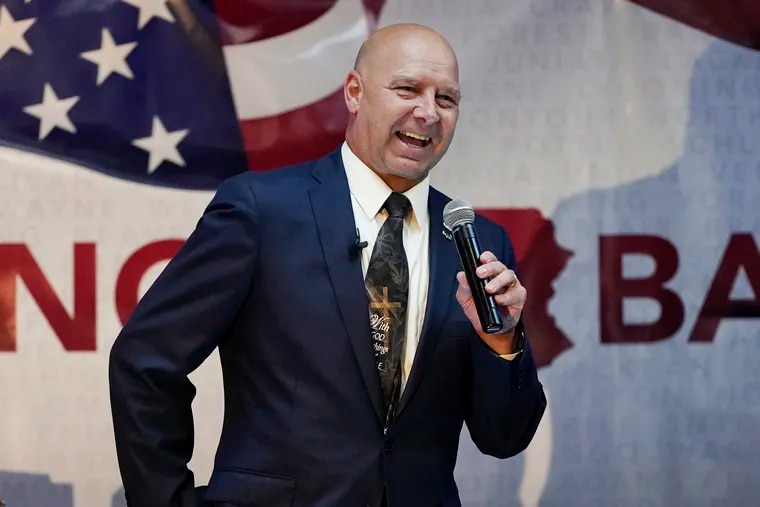 Gab Founder Working With Doug Mastriano Has A Message For The Media: ‘Repent Now’

“Repent now and accept Jesus Christ into your heart. Every knee will bend, including yours.

This is the response of Andrew Torba, the founder of social media site Gab, to a HuffPost reporter who wrote last week about Doug Mastriano’s gubernatorial campaign paying the site $5,000 for consultancy services.

“We are taking back this country for the glory of God and there is absolutely nothing you can do to stop us,” Torba wrote to reporter Christopher Mathias.

Gab, a platform favored by anti-Semites, extremists and QAnon conspiracy theorists, came to public attention in 2018 after one of its users allegedly killed 11 people at the Tree of Life synagogue in Pittsburgh.

In a video Torba posted on Saturday, he said the $5,000 payment from the Mastriano campaign was to “run ads on Gab social,” as other candidates do.

READ MORE: Doug Mastriano deletes his videos from Facebook as he runs for governor of Pennsylvania

Mastriano has seen his followers on Gab grow rapidly, from about 2,300 in early April, according to WESA-FM in Pittsburgh, to nearly 38,000 today. Recently, he posted frequently. Some of those posts have sparked dozens of anti-Semitic attacks on state Attorney General Josh Shapiro, the Democratic gubernatorial candidate, WESA reported.

“I and many other white American Christians are TERRORIZED by the psychopaths of the Jewish Mafia,” one commenter wrote three days ago in response to another post by Mastriano criticizing Shapiro’s economic and energy policies.

“If you really want to win, appeal directly and openly to the Whites. Trump getting close to that is the only reason he won in 2016 and not getting close enough is the reason he lost in 2020,” another commenter added.

Neither Torba nor Mastriano returned requests for comment from The Inquirer on Monday. Mastriano’s campaign does not respond to questions from most news outlets.

“As many of you know, it is my policy not to conduct interviews with journalists who are not Christians, or with media outlets that are not Christians,” Torba said in his Saturday video, “ and Doug has a very similar media strategy.”

After the Pittsburgh attack, Torba said Gab had a “zero tolerance policy” for violence and terrorism. But, as HuffPost noted:

In the years that followed, Gab remained a haven for hate, and Torba himself became increasingly anti-Semitic and racist in his words and behavior. “We are building a parallel Christian society because we are fed up and tired of the Judeo-Bolshevik one,” he said. tweeted last year, using a term popularized by the Nazi Party in the 1930s. In February, Torba was featured speaker at a white supremacy conference in Florida, where he used “great replacement” rhetoric. (Other speakers at the event rented Adolf Hitler and called for the hanging of Dr. Anthony Fauci.) More recently, after a white supremacist gunman targeted blacks in a grocery store in Buffalo, New York, killing 10, Torba implored his Gab followers to marry and reproduce only with whites.

Social media is crucial to Mastriano’s unconventional campaign strategy. Facebook, Gab and other platforms allow him to communicate directly with his followers without having to answer questions from reporters who might ask questions he doesn’t want to answer. He limit your interviews only the friendliest radio hosts and podcasters.

In early May, with Mastriano still battling for the GOP nomination in a crowded primary field, Torba interviewed him. The two men praised each other and Mastriano told Torba“Thank God for what you have done.”

The following week, according to Media matters to AmericaGab approved Mastriano. Torba wrote, “At last we have a strong Christian to lead PA out of the pit of hell and into the glory of God.”

Other Republicans have announced on Gab — including Rep. Marjorie Taylor Greene (R., Ga.), Rep. Paul Gosar (R., Arizona) and Georgia GOP Senate candidate Herschel Walker — but in her video posted over the weekend, Torba called Mastriano’s run for governor “the most important midterm election of 2022.”

On Monday, sponsored comments appearing under a Torba post on Mastriano, including one selling ivermectinfalsely claiming it ‘destroys’ both COVID and cancer, and another from the Freedom First Society who said: ‘If you don’t believe in God, then you can’t claim inalienable rights that granted to you by God.”