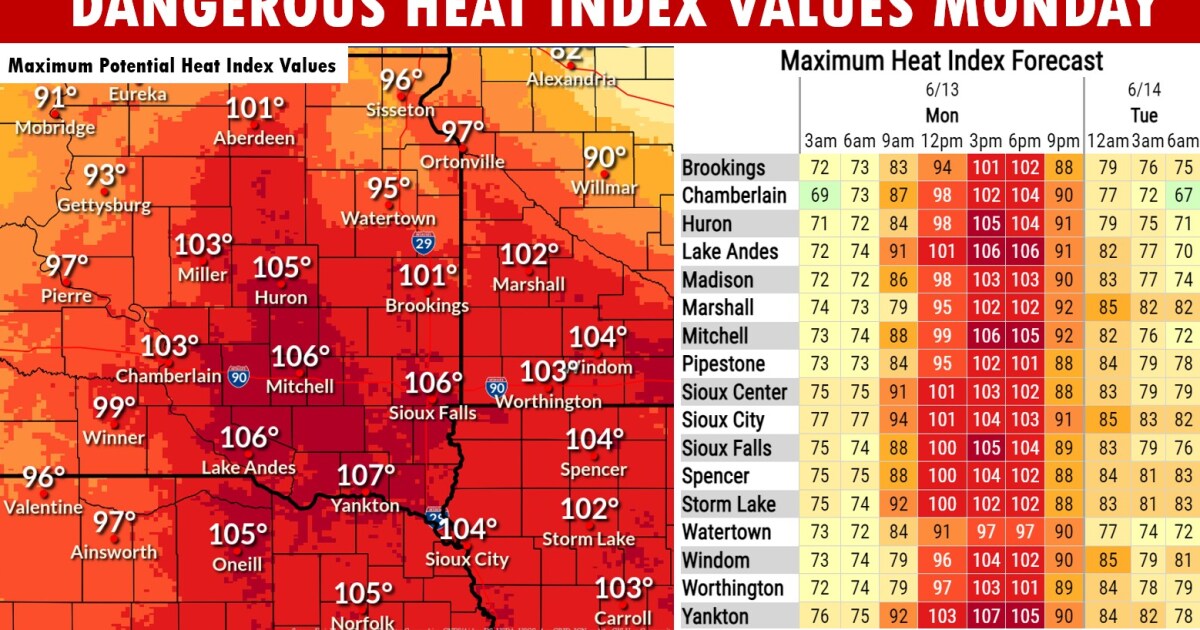 The hottest weather of the year so far is forecast for Iowa today and tomorrow.

A heat advisory was issued today for all of Siouxland and the state of Iowa.

The National Weather Service tells Radio Iowa that parts of western Iowa could see temperatures over 100.

There should be some relief in the midweek high temperatures with highs in the 80s and even 90s.

Experts say to drink plenty of water, even if you’re not thirsty. And never leave children or pets unattended in a vehicle.

The six to 10 day forecast calls for above normal temperatures for Iowa through June 22. Summer officially arrives on the 21st.

Sioux City police have released the name of a man who was fatally shot near downtown Sioux City last week. Katrina Barnes, 32, has been charged with 2n/a Degree of murder for the death of Dolerean N. Wade Thursday night. Barnes also faces drug charges. Jordyn Easton, 25, of Sioux City, was charged as an accessory after the fact. Investigators say she concealed evidence related to the crime. The investigation into the fatal shooting is ongoing.

Today the Woodbury County Elections Commissioner said the post-election audit for the primary election was complete. Pat Gill says the results of the audit matched the results counted on Election Day. The Iowa Office of the Secretary of State chose the US Senate results from Precinct 15 to be audited by lot. The local audit also included Constituency 14 since both constituencies were consolidated from last week’s elections. Auditing is standard procedure throughout the state of Iowa.

Iowa is launching a $20 million grant opportunity for nonprofits to expand their services. Nonprofits in Iowa can apply for grants ranging from $500,000 to $3 million from the Nonprofit Innovation Fund to improve their infrastructure. The application window opens later this month.

Paul Thelen directs the Larned A. Waterman Iowa Nonprofit Resource Center at the University of Iowa. He says the government is increasingly paying nonprofits to provide direct services to people. And this grant is an opportunity for them to grow. But, this is not always enough.

“It’s not enough to say, Well, we built the facility, we built the infrastructure, but we didn’t take the necessary steps so that it is now possible to employ the people who would be needed. to make it work. But rarely is it just one lever you push in the nonprofit sector. And that’s where I think our nonprofits in Iowa and elsewhere are very resilient.

Thelen says smaller nonprofits haven’t fared as well as larger ones in terms of revenue during the pandemic, especially if going online was difficult or impossible. And now, nonprofits, especially social services or health care, are facing high turnover and burnout issues.

The federal government said it would distribute $60 million among 12 states, including Iowa, that have waterways that flow into the Mississippi River to help them control agricultural runoff and other pollution that contributes to a dead zone in the Gulf of Mexico.

The bid on the latest private luncheon investor Warren Buffett plans to auction to raise money for a California homeless charity has already topped $3 million. The online auction raising money to support the Glide Foundation’s work to help the homeless in San Francisco began Sunday and runs through Friday evening. Buffett said this year’s auction — which is the first since before the pandemic — will be the last. Lunch is already proving pricey but bidding remains well below the record set in 2019 of $4,567,888. The biggest deals usually come towards the end of the eBay auction.

A family fun night is planned for tonight by the Sioux City Neighbors Network. It will take place at the Lief Erikson and Lewis pools from 6 to 8 p.m.

A southwestern Iowa native who sang the theme song to the early 1990s hit TV show “Twin Peaks” has died at the age of 65.

Julee Cruise also appeared on Twin Peaks as a singer and was featured in both sequels. She recorded four solo albums and toured with the B-52s in 1992, filling in when vocalist Cindy Wilson took a break from the group.

In 2018, Cruise announced on Facebook that she was retiring from performing due to systemic lupus. Her husband told The New York Times that Cruise battled depression and his health and took his own life.

Cruise was born in Creston. After earning a music degree from Drake University, she moved to Minneapolis before leaving for New York in 1983.