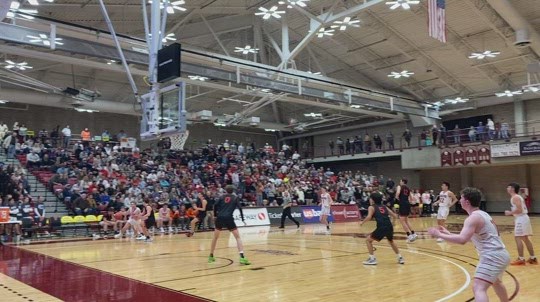 Centauri was the only team that was the bottom seed in its Thursday game to win and advance to the Final Four, leading from start to finish with Colorado Academy. On Friday, they picked up another win as the bottom seed, albeit in more dramatic fashion, coming back from 12 points at halftime and hanging on to win 71-67 against St. Mary’s.

“We’ve been looking forward to this all season,” said Centauri’s Baron Holman. “We did our second year here, and it feels good to be back and in the league.”

St. Mary’s fast pace helped them take a 21-12 lead late in the first quarter behind point guard Sam Howery’s big night. A 3-point barrage fell, and he was also able to drive to the rim to score or pass to an open teammate to capitalize. He scored 18 points in the first half to help his team take a 39-27 halftime lead.

Howery continued to look his best, but Centauri continued to play his game, slowly cutting the deficit. Down five points midway through the third, they had the biggest run of the night, scoring 11 of the next 14 points to end the third quarter with a 50-47 lead. Holman did his part on the free throw line while Mason Claunch made a few 3-pointers and Chaz Holman attacked the rim and was able to finish.

“Coach said keep doing what we’re doing,” Holman said. “We would finish and could come back.”

Chaz Holman continued to attack the rim for a few more layups and Baron Holman made more free throws which helped push the lead up to 11 points in the fourth.

Howery did everything he could to rally St. Mary’s back with a number of 3-point shots that were well behind the line. His shot, along with a timely assist to Cyrus Hernandez for another 3-pointer, brought the Pirates within two points. Two missed free throws from Centauri gave them the ball and a chance to win in the final seconds, but Centauri would not be denied. A steal with seven seconds and two free throws from Baron Holman ensured the upset.

“I knew it was good,” Holman said on his free throws. “Every day I pretty much shoot free throws. I knew once it got to the line, it was money.

Claunch and Chaz Holman each led the team with 14 points and Baron Holman followed with 13, including 10 free throws. A brilliant effort from Howery saw him go for 36 points for St. Mary’s.

For many of the boys on the team, Saturday will be their chance to win a second state title this school year, adding to the football championship the team was able to win in November.

“It pumps us high,” Holman said. “We played in a state football championship this year, and we have all the confidence in the world.”