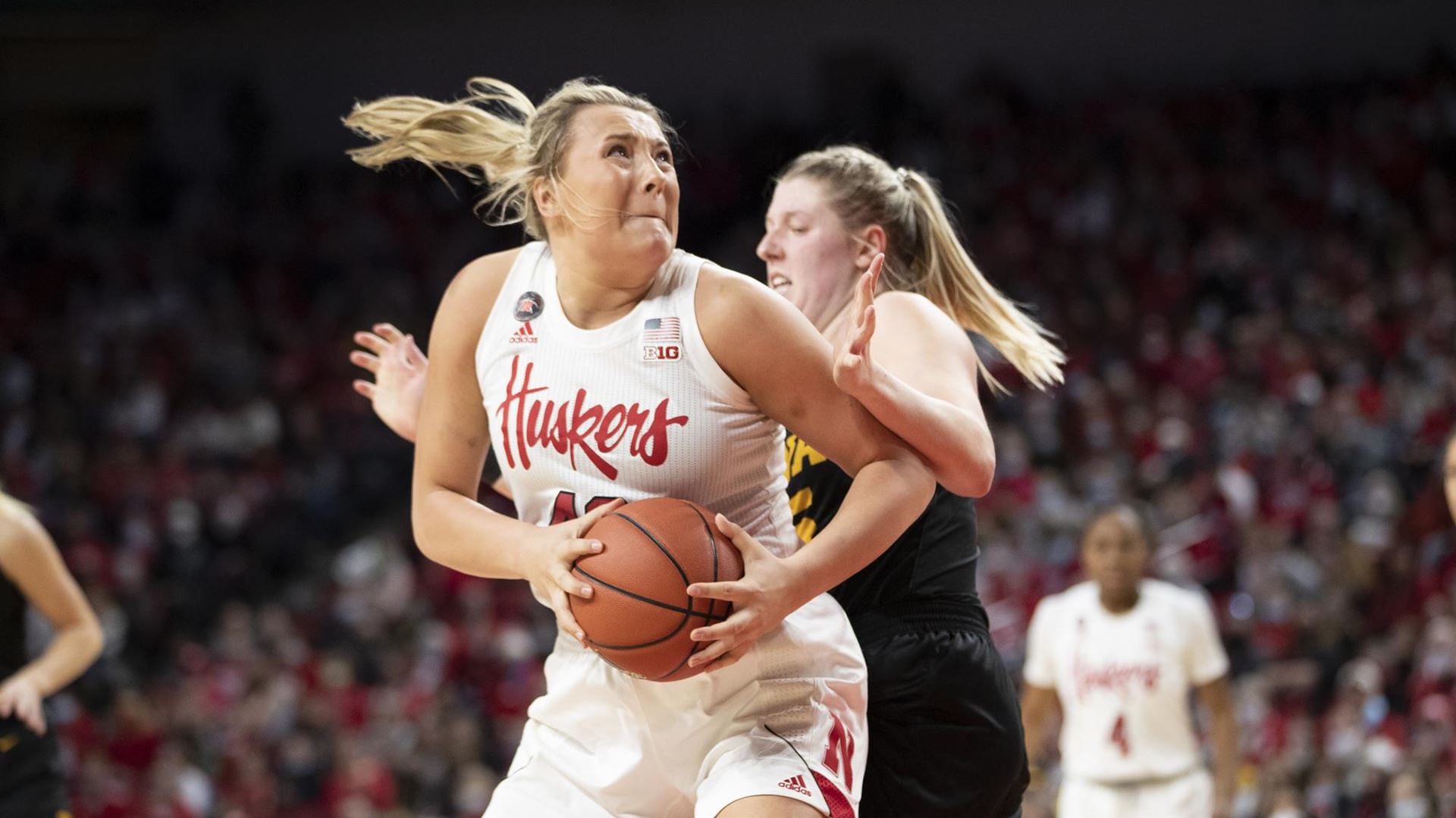 Bloomington, Ind. – Nebraska women’s basketball team trailed 17 points midway through the third quarter at No. 6 Indiana before cutting the lead to 68-65 with 24 seconds left, but the Hoosiers sank four free throws in the stretch to secure a 72-65 win. the Huskers Thursday night at the Simon Skjodt Assembly Hall.

The loss dropped Nebraska to 13-3 overall and 2-3 in the Big Ten, while Indiana improved to 13-2 and 5-0 in the conference with its 14th straight regular season victory in the Big Ten and his eighth straight victory this season.

With Nebraska trailing 63-54 with four minutes to go, USBWA National Freshman of the Week Alexis Markowski scored nine straight points for the Huskers, reducing the IU margin to 68-63. So fellow freshman Allison Weidner hit a pair of free throws with 24.3 seconds left to reduce the margin to one possession for the only time in the second half.

Markowski, a 6-3 forward from Lincoln, led Nebraska with 17 points, seven rebounds and three steals, while Weidner (Humphrey, Neb.) added seven points and five rebounds for the Big Red. Jaz Shelley added a team-best 15 points, nine rebounds and three assists to go along with two steals, while Sam Haiby launched in 10 points. Haiby scored Nebraska’s first basket in the fourth quarter to start a 6-0 Husker run after NU led 57-43 early in the final period.

However, Haiby left the game early in the fourth with an apparent arm injury, but the Huskers continued to walk away without the All-Big Ten guard on the ground.

The Hoosiers were also limited, as All-Big Ten forward Mackenzie Holmes missed his first game of the season with a leg injury, before starting forward Aleksa Gulbe fouled out of the game. with four minutes left, leaving IU with his two starting position players. on the bench. The Huskers also lacked a starting forward/center Bella Cravens for the third game in a row due to a leg injury.

National Player of the Year contender Grace Berger led Indiana with 22 points, seven rebounds, three assists, two steals and a block, while Gulbe finished with 17 points, five rebounds and four steals. . Nicole Cardano-Hillary scored her 13 points in the first half to help the Hoosiers to a 44-31 halftime lead, while Ali Patberg put four Hoosiers in double digits with 10 points, including both final points at the line with four seconds left to close out the win.

The biggest shots of the second half, however, came from Indiana’s Chloe Moore-McNeil, who hit a pair of three-pointers in the fourth quarter and knocked down a pair of no-pressure throws with 23.4 seconds left. with IU hanging ahead 68-65. Moore-McNeil’s field goals in the fourth quarter were two of only three in the period by the Hoosiers, who also had just one field goal in the final six-plus minutes of the third quarter. Moore-McNeil finished with all eight of Indiana’s points off the bench on the night, as only six Hoosiers entered the contest.

The Huskers got off to a strong start in the first four-plus minutes, scoring six of their first 10 points on second-chance chances to take a 10-7 lead. But the Hoosiers responded by forcing turnovers on four straight Nebraska possessions to spark an 8-0 run and take a 15-10 lead.

Nebraska was able to reduce the UI margin to 17-15 on a Annika Stewart three-pointers with 1:49 left in the quarter, but Cardano-Hillary closed the period for the Hoosiers with five straight points to give Indiana a 22-16 lead late in the first. Stewart finished the night with six points on a pair of threes.

The Huskers cut the margin to four at 31-27 with five minutes left in the second after a Ashley Scoggin three points, before the Hoosiers came out of media timeout on a 9-0 run that included five straight points from Patberg to give the Hoosiers their biggest lead at 40-27. Scoggin also finished the night with six points from two threes.

Nebraska got back-to-back buckets from Markowski and Shelley to briefly cut IU’s lead to single digits at 40-31, before the Hoosiers scored the final four points of the half to send Indiana to the locker room with a 44-31 lead at halftime.

Shelley led Nebraska with 10 points in the first half, while Markowski added six, but the Huskers hit just 39.4 percent (13-33) of their shots, including just 3 of 12 threes. Indiana replied with 54.5 percent (18-33), including 3 of 8 three-pointers. The Huskers tied the Hoosiers on the glass with 19 rebounds, but Indiana won the first-half turnover battle 10-6 and outscored the Huskers 11-2 in turnover points.

Cardano-Hillary led Indiana with 13 first-half points, while Berger and Gulbe each contributed 12 halftime points. Patberg added seven points, with the experienced Hoosiers foursome accounting for Indiana’s 44 points in the first half.

Nebraska is expected to return to Big Ten road action on Sunday when the Big Red travel to Iowa on Sunday. The denunciation between the Huskers and the Hawkeyes is scheduled for 5 p.m. (CT) with live television coverage by the Big Ten Network. Free live audio will be provided by the Huskers Radio Network at Huskers.com.