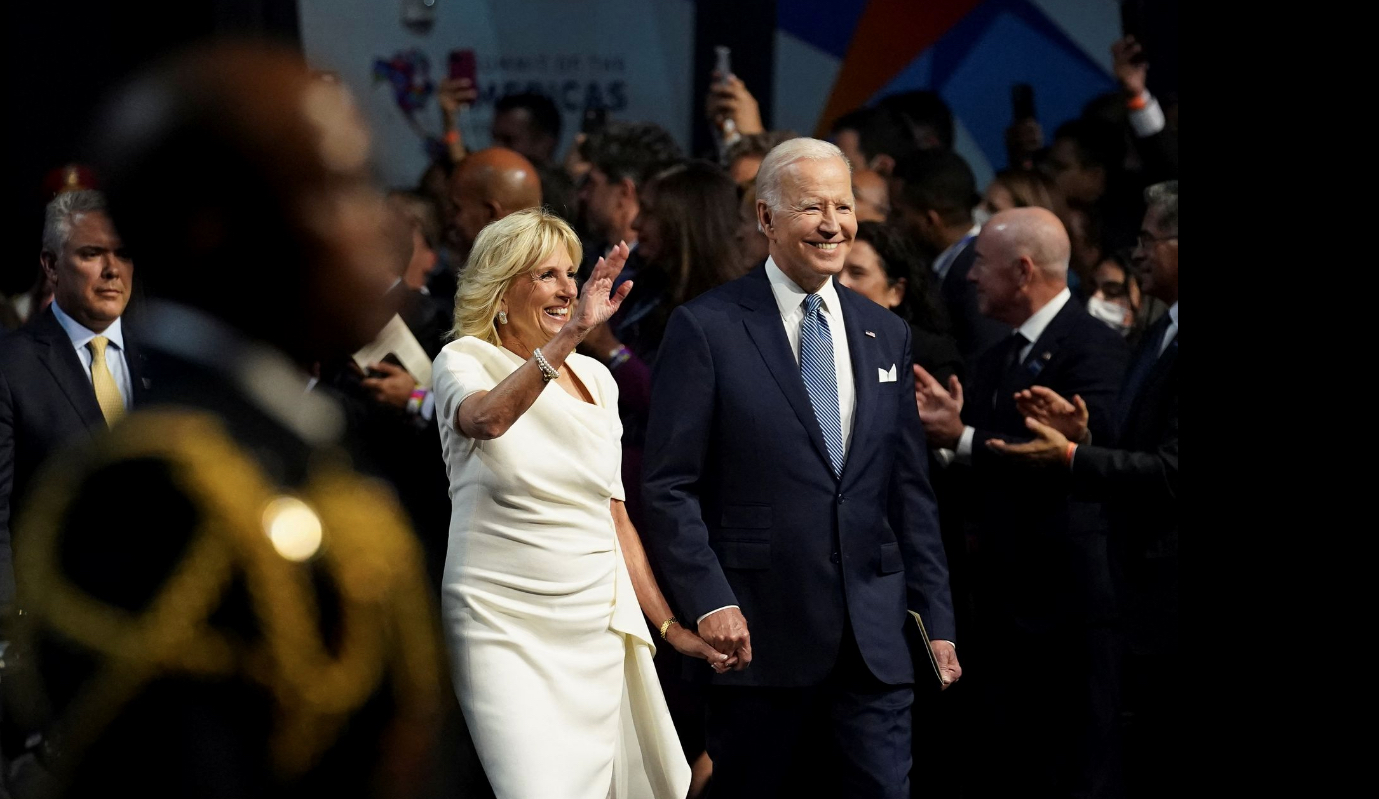 The Organization of American States (OAS) has 35 member countries. The OAS promotes democracy, human rights, security and development. It was founded in 1948. Nine summits have taken place since then; the last Summit of the Americas was held last week in Los Angeles.

Cuba was suspended from the OAS in 1962; Venezuela withdrew in 2017, Nicaraguan President Daniel Ortega announced his country’s withdrawal from the OAS in November 2021.

The United States hosted the 9e Summit and did not invite the leaders of these three countries.

“We just don’t believe dictators should be invited. We do not regret it and the president will stick to his principle,” said Karine Jean-Pierre, White House press secretary.

Mexican President Andrés Manuel López Obrador boycotted the summit in solidarity with the three countries that were not invited. Marcelo Ebrard, Minister of Foreign Affairs of Mexico, was present instead.

“I’m not going to the summit because not all American countries are invited and I believe that we must change the policy that has been in place for centuries: exclusion, the desire to dominate without any reason, non-respect of the sovereignty of countries (and) the independence of each country,” López Obrador told reporters in Mexico City.

Although clearly a snub to President Joe Biden, leaders from 23 countries came to discuss health policy, migration, how to streamline immigration processes and funding multilateral to share the associated costs.

At the summit, President Biden introduced an economic stimulus initiative called the Americas Partnership Initiative for Economic Prosperity (APEP). He described how interested countries could cooperate on trade, climate change, supply chain resilience and regional investment. The APEP announcement was more of a call to discuss a plan rather than a detailed plan.

After announcing he would not attend last week’s summit, López Obrador said he would visit the White House in July and hoped to speak with Biden, including all leaders of the Americas, at future summits. .

The shrinking sphere of American influence

American discourse on the economy and the foreign policy of its neighbors is considerable, but is no longer what it once was.

Mexico’s experience with US foreign policy over the past two decades has been absolutely disastrous,” said Ted Lewis. He is co-director of Global Exchange, a human rights organization based in San Francisco. He said Mexico was one of the first Latin American countries to recognize Cuba in the 1970s.

“When the United States supported military dictatorships all over America that crushed experiments in democracy, Mexico opened its arms to refugees from Chile and Argentina, it is well known. And in the 1980s, the Mexico had the temerity to oppose US policy in Central America,” Lewis said.

However, Mexico borrowed heavily to develop oil reserves in the Gulf of Mexico and this led to a financial crisis when the price of oil plummeted in the 1980s. Lewis said Mexico’s economic collapse caused fall its traditional non-aligned foreign policy “under the thumb of the national security doctrine in the United States”.

After the end of the Cold War, national security priorities shifted from the communist threat to the “War on Terror” and the “War on Drugs”. According to Lewis, the “War on Drugs” is the dominant narrative that most Americans have toward Latin America.

The case of Cuban refugees

Mexico has a neutral foreign policy, has long recognized Cuba and does not support the US embargo. Last year, for example, López Obrador blamed the boycott for the unrest in Cuba.

At the same time, however, Mexico cracked down on Cuban asylum seekers. According to the Washington Office for Latin America, in the first quarter of 2022, 861 Cubans were returned, 345 by the United States Coast Guard, 473 by Mexico and 43 by the Bahamas.

In 1997, the Clinton administration launched a “wet feet, dry feet” immigration policy for Cubans. It deported refugees arriving by boat, but Cubans who came overland and lived in the United States for a year were expedited to a green card. Barack Obama ended the policy just before leaving office in January 2017.

Since 2017, Mexico has granted more Cubans visitor status and work permits under its immigration laws. This temporary legal status supports the “Stay in Mexico” border policy announced by former President Trump in 2019. The Biden administration wants to overturn the Migrant Protection Protocols (MPPs) but federal courts, including the US Supreme Court United, prevented its termination. The United States deported more than 70,000 people to Mexico during Trump’s presidency.

López Obrador tries to have it both ways. He reaffirmed Mexico’s independence to stay away from foreign conflicts and chastised the United States for trying to exert influence in the hemisphere. At the same time, Mexico has been an ally in the war on drugs and has cooperated with the United States on immigration issues.

How Mexico views the border crisis

The United States is seeking regional solutions to its refugee backlog on its southern border.

“From October 2021 to April 2022, there were 1.3 million encounters by US immigration authorities. Sixty-one percent of them are migrants from Mexico, Guatemala, Honduras and El Salvador, which means that the remaining 39% come from other parts of the world,” said analyst Ariel Ruiz Soto. policy at the Migration Policy Institute in Washington. .

Ruiz Soto said the region’s immigration systems are not equipped to handle the diversity of the increased flow of migrants in the Western Hemisphere. The top five countries of origin for asylum seekers in the United States are Mexico, Guatemala, Honduras, Cuba and Venezuela. Many travel through Mexico.

“Mexico apprehended 308,000 migrants in 2021 and received 131,000 asylum applications. This ranks Mexico third in the world for asylum seekers,” he said.

“Most countries have used law enforcement as the first approach to managing these migration flows and law enforcement often results in deportations and repatriations of people of certain nationalities, perhaps more frequently than others. ‘others,” Ruiz Soto said.

“We continue to see similar eviction rates,” he said.

From October 2021 to April 2022, US authorities apprehended 198,000 migrants. They came mostly from Mexico, Guatemala, Honduras, Cuba and Venezuela.

“Those are the top five countries of origin, but they also transit through Mexico,” Ruiz Soto said.

Mexico apprehended 308,000 migrants and received 131,000 asylum applications in 2021. “This ranks Mexico third in the world for asylum seekers,” he said.

“In practice, however, the nationality of the migrant makes a difference in the acceptance rate of asylum applications in Mexico.”

He said Venezuelans have an almost 90% acceptance rate in Mexico; about 70% of Hondurans and Guatemalans are accepted; Cubans, Nicaraguans and Haitians tend to be the most likely to be rejected.

Ruiz Soto said many Haitian, Cuban and Nicaraguan migrants travel in caravans and are therefore more likely to be subject to repression.

The declaration on migration resulting from the Los Angeles summit had three main objectives:

Throughout the Americas, grassroots movements are challenging the dominant paradigm of economic development. The idea that private enterprise should lead and the government should lead the people to follow is widespread among economic and political elites.

The natives of Brazil trying to save the Amazon don’t share it; displaced farmers in Colombia who lost their land and water to the Sinaloan Cartel say the 2016 peace referendum between the government and FARC rebels was a sham (it narrowly lost); Minnesota Native Americans who blocked the pipeline from crossing their land are still fighting; protest movements have sprung up in some countries where water supply has been privatized, including Uruguay, Bolivia, Brazil and Peru.

The rationale for privatization is that development requires money that governments do not have and a rising tide lifts all boats. But opponents argue that these deals are one-sided and based on an extractive resource model that destroys the environment, robs communities of their homes, their livelihoods and, ultimately, their lives.

Paraguay offers a solution for sustainable development. The country owns half of ITAIPU, the largest hydroelectric dam in the world on the border with Brazil. Paraguay can only use a third of its share of the energy it produces. He has money left over for other things.

Argentina generates 10% of its electricity from the wind. It aims to obtain 20% of its electricity from renewable energy by 2025. More than 50 large wind farms have been built across the country. Wind power has increased fourteen times over the past five years. In 2021, wind and solar in the United States accounted for 13% of the country’s electricity production. Other Latin American countries are leading on the sustainable energy front, not the United States

The American news media largely panned the Summit of the Americas in Los Angeles. In his speech to leaders at the summit last week, Biden tried to project unity and common purpose in the Western Hemisphere. In addition to Mexico’s López Obrador, leaders from Guatemala, Honduras, Bolivia and El Salvador did not attend the summit.