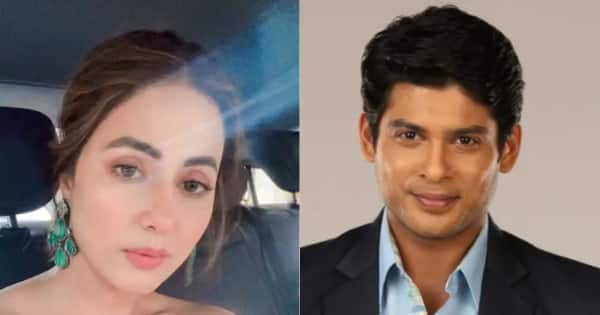 Hina Khan, Sidharth Shukla, Sriti Jha, Helly Shah and others have made news in the television world today. Hina Khan’s photos from UK Asian Film Festival gone viral. Sidharth Shukla fans celebrated his Balika Vadhou stint. Sriti Jha opened up about his participation in Khatron Ke Khiladi 12 and says it’s out of his comfort zone. Helly Shah flew to the French Riviera to walk the red carpet at Cannes 2022 and more. Here’s a dekko on who and what made the news in the TV world today… Also Read- Anveshi Jain aka Neeta Bhabhi from Gandii Baat, Rani Chatterjee aka Chanewali from Mastram and other HOTTEST Female Characters in Indian Web Series

Sidharth Shukla fans never forget to celebrate him, his performances and his achievements. Recently, Sidharth fans celebrated his stint on popular TV show Balika Vadhu. His fans trended 10 YRS OF SIDHARTH AS SHIV on Twitter and shared various videos and photos of Sidharth as Shiv. View the report here. Read also – With Sarkaru Vaari Paata CRUMBLING at the box office, discover Brahmotsavam, Spyder and 8 other HUGE FLOPS by Mahesh Babu

Helly Shah will walk the French Riviera red carpet for her Cannes 2022 debut. She was spotted at Mumbai airport today. Helly looked very pretty in a matching ensemble and was all smiles to the paparazzi in attendance. Helly Shah to promote her film Kaya Palat at Cannes 2022. Check out her pics here.

Choreographer Tushar Kalia is believed to be one of Khatron Ke Khiladi 12’s contestants. The dancer is now caught as he announced his engagement to Triveni Barman on social media. He shared incredible photos from the ceremony on his Instagram account and wrote, “For a fresh start @trivenibarman Send us your love and blessings. #committed #gratitude.”

Harsh Nagar opens up about the return of SNS2

It looks like Harsh Nagar who played Anant in Saath Nibhaana Saathiya 2 won’t be returning to the series for some time. The actor’s track ended in January and a new track was introduced with Gautam Vig on the lead. Harsh was told he would be re-entering the show soon. But it’s been over two months. “In March, I was told that my track would be presented soon. I waited almost two months for my track to come back, but there was no progress on it. The creators wanted to introduce new twists and so they brought in another actor. But I was told that the focus would soon shift to Anant’s family on the show. In the meantime, I had to finish filming my comedy movie with Sunny Leone, so I’ve been busy with that. Since then there’s been no sign of my track being revived, I’m also open to new offers,” he told ETimes.

That’s all about the newscasts for now!

2022-05-15
Previous Post: Who’s who in the Michael Sussmann trial
Next Post: Mayor of Oxnard warns community about fentanyl