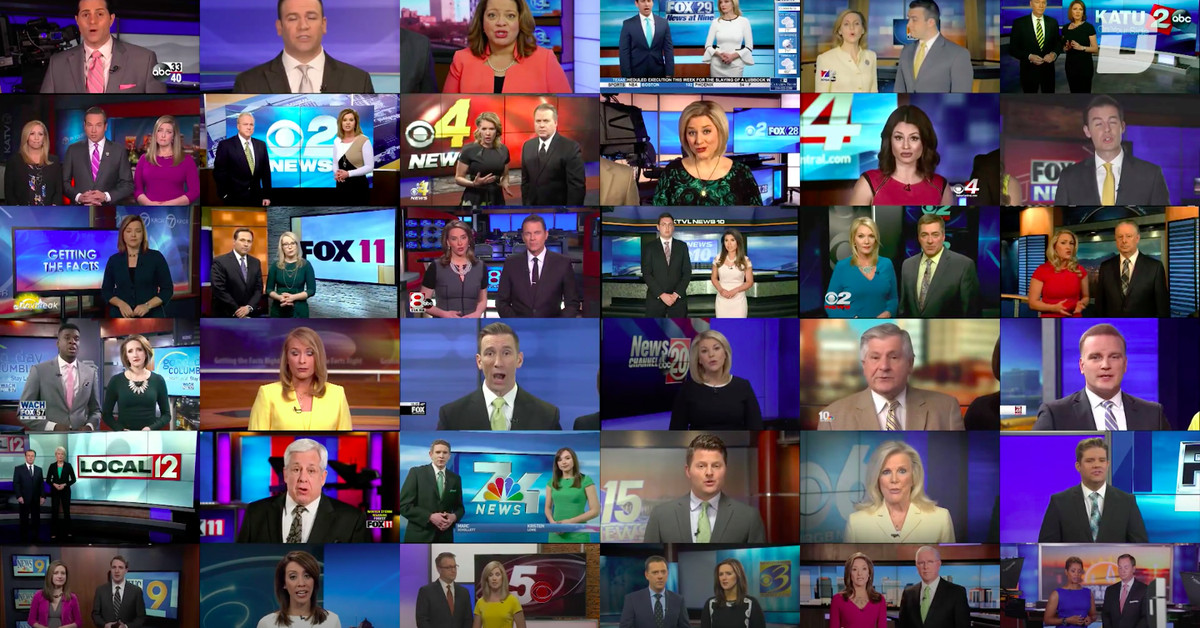 Sinclair News: We are reporters at a Sinclair news station. We are furious.

We knew this was coming.

When Sinclair announced that all stations on the company’s network, including ours, would be required to deploy a “journalistic responsibility promotion,” the mood at our station darkened. Our presenters were informed in an email that the script they would be reading was a simple public service announcement about the dangers of biased reporting. But after laying eyes on the script, many of us felt uneasy.

“Unfortunately, some members of the media use their platforms to push their own personal biases and agenda to control ‘exactly what people think,'” the presenters recited. “It’s extremely dangerous for a democracy.”

We hated how the PSA criticized other media and how it insinuated that we were the only source of truthful information – despite the rightward tilt our network has taken over the years. Our anchors privately said they felt like spokespersons for the company, especially when they found out that no changes to the script were allowed. Yet the bosses made it clear that the reading of the message was not a suggestion but an order from above.

It seemed like everyone knew this was all a bad idea. We expected fallout. But we had no idea how viral the promo would go until Friday, when a montage deadspin video featuring the robotic voices of Sinclair anchors reciting the same word-for-word script blasted across our Twitter feeds. Our station’s Facebook page has been flooded with angry posts denouncing our journalism, our station and our employees.

We are reporters at one of 193 local television stations owned by Sinclair Broadcast Group, a media company with conservative and pro-Trump ties. We write this essay because we are disturbed by the editorial direction our management is taking, and we want people to know that many of us at Sinclair reject what our company does. We write this anonymously because if we speak under our own names, we could lose our jobs – and potentially owe Sinclair money.

It is already an uncertain and strange time for journalists. Trust in the media is moo. Right now, journalists need all the support they can get. This promo, despite its lip service to “journalistic integrity”, encourages the opposite.

And just when we thought the bad publicity on the on-air op-ed couldn’t get any worse, Donald Trump tweeted:

So funny to see Fake News Networks, among the most dishonest groups of people I’ve ever dealt with, criticizing Sinclair Broadcasting for being biased. Sinclair is far superior to CNN and even more to Fake NBC, which is a complete joke.

For many of us, that was the death knell. The perception of much of the public was that Sinclair was Trump TV. Now I felt like that perception was a reality. Did Trump’s seal of approval put us on the same side as Infowars and Fox News? It was a place many Sinclair reporters never expected or wanted to be.

A station that has been close to our hearts for many years has been stripped of its credibility. The station has lost longtime viewers — and the respect of the community, its most important asset.

And we Sinclair employees have lost respect for our jobs.

The Company’s Baffling Content Didn’t Start With This Promo

Most of the time, we don’t feel like we work for Sinclair — we feel like local reporters covering what’s happening in our communities. Our business leaders do not influence our local stories.

They To do feed us a feed of country-focused conservative content. Sinclair recently produced a multi-part series on immigrants to Sweden, for example, and the many alleged “problems” the country has faced as a result. A former Trump aide Boris Epshteyn’s commentary, which is titled “Bottom Line With Boris”, now airs on many Sinclair stations several times a week, often boiling down topics to a simple message: “Donald Trump has right and the Democrats are wrong.” When the Eagles won the Super Bowl, Epshteyn complained about athletes refusing to go to the White House.

Whenever we have to hear Epshteyn’s catchphrase, “The result is next,” we feel a little uneasy. It makes us want to apologize to people watching and tell them we wish we didn’t have to perform this.

The tone of Sinclair’s national news slowly became more slanted. We’ve gone from unusually aggressive coverage of Hillary Clinton’s emails to reports about the so-called “deep state”. Sinclair pushes a daily segment that follows terrorism-related incidents around the world. It looks like Sinclair management is ramping up the pressure on pro-Trump content, and we reporters at this station are the frogs in the pot.

If we could escape this pot by quitting, we would do it tomorrow. But it’s not that easy.

Under a clause that appears in many contracts (such as Bloomberg News reported), if an employee quits, they could end up owing the company thousands of dollars. The penalty for breach of contract is the payment to Sinclair of a portion of the employee’s annual salary, according to a complex formula. It’s money that most employees simply don’t have. It’s a decision between going bankrupt or holding on for another X years. (When asked for a comment by the Huffington Posta Sinclair spokesperson said, “Collateral damages are the norm in our industry. “)

Faced with the choice between possible unemployment and staring into a camera to read this script, many chose to swallow hard and read it.

We think of the dozens of anchors that appeared in the promo. We didn’t have to read the script on camera. Hardworking journalists, many of whom were loved by their communities, are now picking up the pieces of their reputation. Their faces are plastered all over the internet, with people calling them accomplices, bobbleheads and puppets.

We know some presenters tried to resist, but for many reasons they felt compelled to read it. They had families to feed. They literally couldn’t afford to quit. (A spokesperson for Sinclair Recount the Huffington Post, “No one was told their job was on the line.”)

The fact that the op-ed has gone viral probably makes many of them anxious and uneasy. Although we are sympathetic, we believe that anyone involved in the promotion should to feel uncomfortable. Maybe the news directors, presenters and producers did their thing, but now they should be asking themselves questions. They should be questioning their values, as well as the industry they work in and the company that put them in that position.

So far it doesn’t look like Sinclair is backing down

We’d like to think that Sinclair will learn from this, that they’ll admit they made a mistake, apologize to their employees and viewers, and take steps to rebuild trust with both of them. We’d love to see a public promise from Sinclair that no station on their network has to air anything they don’t want to.

But that doesn’t seem to be the plan.

In a response to media, Sinclair wrote: “We are unsure of the motivation for the criticism, but find it curious that we are being attacked for asking our reporters to remind their audiences that unsubstantiated stories exist about the social networks.

For them, everyone is wrong. Every media that talks about it is there to get it. Right now, it looks like they’re just going to rush in, shout “fake news” and hope it goes away.

We wonder where they got that from.

First person is Vox’s home for compelling and provocative narrative essays. Do you have a story to share? Read our submission guidelinesand get us started firstperson@vox.com.

2018-04-05
Next Post: Ranking services differ on local news station which was No. 1 in November | Columnists