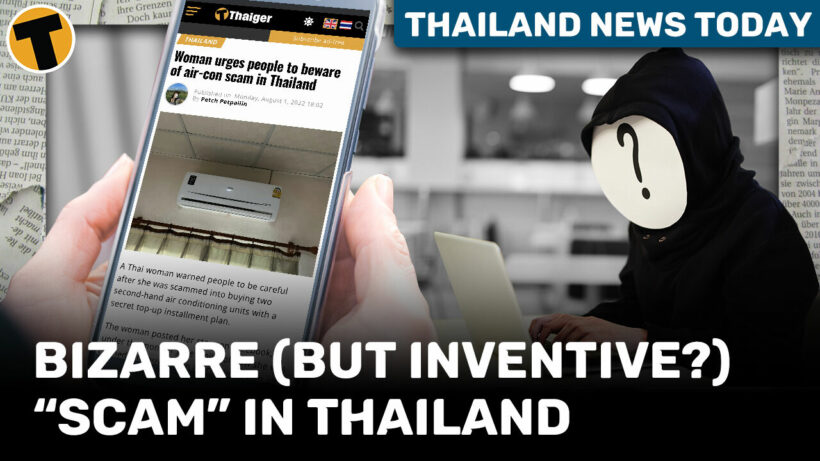 A Thai woman said she was scammed into buying two used air conditioners who asked her to pay an extra 900 baht per month to run them!

The woman posted her story on Facebook saying she paid 5,000 baht for each machine and an additional 3,000 baht for installation. They then stopped working a week after installation, and the tech couldn’t figure out why.

She contacted the customer service hotline of air-conditioning company Haier and found that users of the air-conditioning units needed a monthly recharge via a QR code, at 900 baht each month to use them. Otherwise, the system would automatically shut down.

The woman informed on social media that she had finally decided to remove the two air conditioning units, even though it would cost her 8,000 baht, and filed a complaint with a police station. She said she wanted to warn others to beware of this kind of scam.

A Facebook page iReview.in.th, which shares information and reviews on electronic devices, explained that refill air conditioning units use an Internet of Things system to control the air conditioning system remotely. If users do not top up, the system is shut down by the company that controls it.

Nok Air issued a public statement apologizing to passengers who sat on a Boeing 737-800 for more than an hour after it skidded off the runway at Chiang Rai International Airport on Saturday night.

Several passengers expressed their dissatisfaction with the evacuation procedure.

The airline said the reason it took so long to get all 164 passengers off the plane was because the airline “followed the highest security procedures”. Heavy rain and waterlogged ground outside the plane also made it harder to navigate the evacuation, Nok Air said.

But what mainly bothered the passengers was not the long safety precautions, the fact that the captain turned off the engines which in turn turned off all the lights and the air conditioning in the cabin.

After an hour without air conditioning, perhaps because they had forgotten to recharge the monthly air conditioning plan, passengers began to complain that they had difficulty breathing, that’s when the staff cabin opened the doors and allowed passengers to descend from the emergency exits.

A passenger said only two vehicles came to pick up passengers from the plane and suspects a lack of available vehicles at the airport could be a reason for the delay. However, Nok Air did not cite this as a reason in its statement.

The airport announced the suspension of all flights to and from the airport on Sunday morning. Mae Fah Luang Chiang Rai airport manager yesterday said removing the plane was a three-day job as the plane’s wheels were stuck in the mud and a crane would have to be used to lift the Boeing 737-800 from the ground. .

Flights to and from Chiang Rai Airport should resume tomorrow August 3 at 10 p.m. The disruption to travel has been significant, especially since the incident happened over the four-day weekend in Thailand. Usually, 36 flights a day depart from Chiang Rai airport, facilitating a daily average of 4500 to 5000 passengers.

Continuing the theme of you couldn’t invent this stuff, after 13 years of delayed construction, the new Fai Chai Tunnel in Bangkok officially opened yesterday, only to close due to flooding.

Bangkok Governor Chadchart Sittipunt visited the unfinished Fai Chai Tunnel last month to speak with Public Works Department Director Taiwut Khankaew about the delay in the project. Chadchart made some scathing comments to Taiwut about the project’s perpetual heist that began in 2009.

“Director, you have to pay attention to every detail. No more chance to close the tunnel to repair the construction again. The road seems a bit bumpy but it will be fine because it should be paved with asphalt again, right?”

Taiwut explained that the MRT’s blue line and roadway improvement were the reasons for the long delay, but promised Chadchart that the tunnel would be completed and open by August 1. And Taiwut delivered on that promise as the Fai Chai Tunnel officially opened at 5am yesterday. . However, the tunnel was only open for about eight hours before being closed again due to flooding.

“There was water waiting to drain at the entrance and at the end of the tunnel, and some objects were blocking the drainage. Officials would resolve the issue as soon as possible. The tunnel is expected to reopen around 4 p.m.

The page was again updated to show that the tunnel was reopened at 4:30 p.m.

Bangkok Public Relations said construction of the Fai Chai tunnel was complete, but added that there were some issues to be resolved, such as the water drainage system which the public works department was still working on.

Thailand expects 1,000 doses of smallpox vaccine to arrive in the kingdom from the United States by the end of this month. But the Ministry of Public Health (MOPH) said the vaccines would only be made available to the most vulnerable groups of people in Thailand.

Department of Disease Control Director General Opas Karnkawinpong said yesterday that monkeypox vaccines had not been developed anywhere for years, but the United States has a supply of serum that has been developed by the US FDA in 2019 and approved by the World Health Organization.

Opas said the Government Pharmaceutical Organization expects to receive 1,000 doses of the drug by the end of August.

The director said the vaccines would be made available to people with low immunity, medical conditions or medical staff caring for patients with monkeypox. Each person would receive two doses of vaccine.

Thai media reported that the Department of Medical Sciences was to carry out tests on volunteers to measure levels of immunity and resistance against the monkeypox strain.

Opas has decided to reassure the public about the spread of the monkeypox virus.

“People shouldn’t worry because monkeypox doesn’t spread easily and doesn’t cause serious symptoms. People shouldn’t rush to get the shot because most people won’t need it. Second, vaccines could cause side effects. We only need to use vaccines when necessary, for vulnerable or infected people.

Three Thais traveling to Malaysia for the long weekend have been jailed for three days and fined the equivalent of 50,000 baht after testing positive for the happy plant substance.

The tourists crossed the Malaysian border into Satun province and were asked to provide a urine sample upon arrival at Weng Kelian in Malaysia. When traces of the plant were found in their urine, the tourists were immediately arrested.

The plant was removed from Thailand’s list of illicit narcotics on June 9, but it is still highly illegal in Malaysia. By explicitly saying the name of the plant, our channel is also reported by Youtube, hence the euphemisms.

The Malaysian government has also banned Malaysians from consuming any food or drink containing the plant when traveling to Thailand, as it may stay in their system and they may be tested for the drug when they return to Malaysia.

According to local sources, the Malaysian border force meticulously checks bags, passports and cars for traces of the plant.

Ensuring that arrivals to Malaysia do not bring illicit drugs into the country is one thing, but the requirement that anyone entering Malaysia cannot have traces of the plant in their system will certainly cause a big problem. between neighboring countries.

Subscribe or join our YouTube channel today and become a Thaiger Legend or Thaiger Cub for behind-the-scenes footage and other members-only benefits.