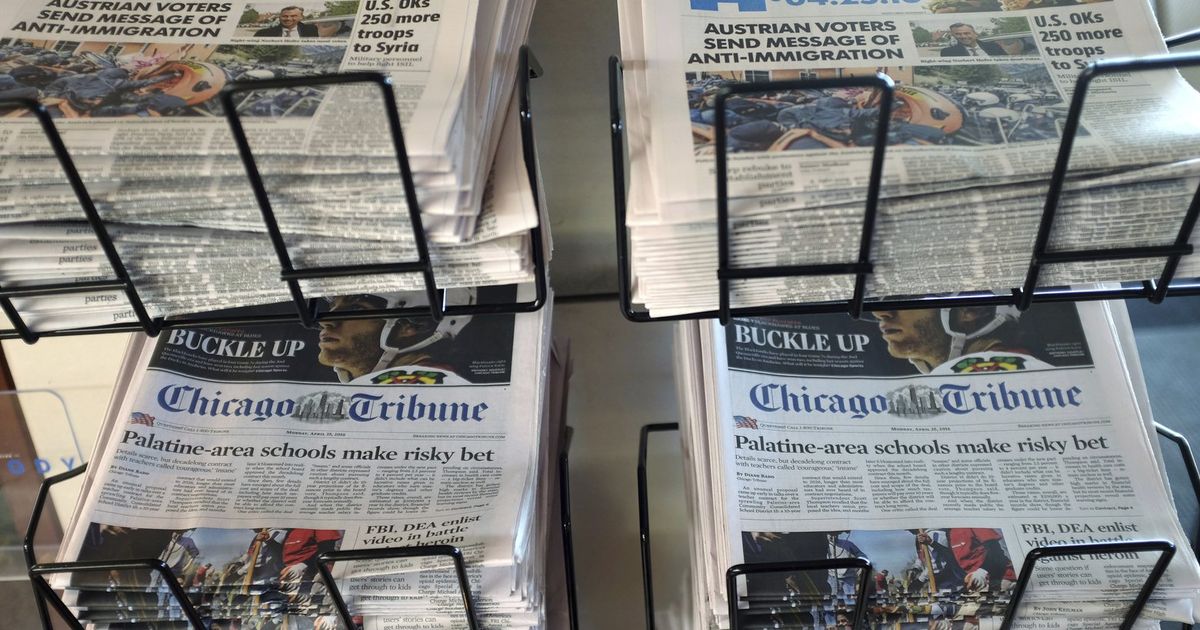 On a warm spring day outside the University of Chicago’s Gleacher Center, a group of MBA students munched on sandwiches and compared their companies’ profit margins.

After going around the one- or two-digit circle, all eyes turned to me.

“Rob, how much does the Chicago Tribune make?” »

The group, made up entirely of business people and MBA candidates from the Booth School of Business at U. of C., was shocked that the crown jewel of Tribune Co.’s media empire earned so much.

Fast forward 20 years. This empire has practically disappeared. The Tribune and parent company Tribune Co. endured painful bankruptcy and a slow rise. The once-proud flagship of the company, considered for decades one of the best newspapers in the country, is controlled by a private equity firm apparently determined to extract the last profits from the place while Chicago implores public citizens and the surveillance journalism that the old Tribune has always delivered.

What went wrong? Competition from new media and changing consumer tastes have undoubtedly played a role. But ruthless public ownership of the media and an insatiable thirst for profit have done the most damage.

This is particularly concerning in light of recent changes at CNN under new corporate ownership Warner Bros. Discovery Inc. While the stated goal of corporate executives is to make CNN more centrist and non-partisan, I fear the new owners are hijacking CNN’s 40 years of respectable and essential journalism just when our country in needs, seeking the Fox News Channel audience with their version of “fair and balanced” and, according to them, higher profits.

As a veteran of two public companies that collapsed on the rocks chasing the siren song of ever-higher profits, I predict this: It won’t work. And the public — this time a nation that depended on CNN to objectively report and explain the biggest national and global stories of our lifetime — will be worse off because of it.

I’ve spent nearly three decades in corporate media as a journalist, editor, and business executive. I got an MBA from the University of Chicago to become a better media manager. I led colleagues at Tribune and Knight Ridder Inc. through media change, preaching that we must embrace new business models in service to our audiences or risk peril.

“You have to understand the business you’re in,” was my frequent admonition to my colleagues in Chicago and Duluth, Minnesota, where I was editor of Knight Ridder’s Duluth News Tribune.

A business must operate like a business to stay in business. But media companies are special. Profits at all costs is not a long-term winning strategy in any industry. And that really doesn’t work in the media, where the work itself is special. Community service is part of the connection to the public. The long term matters in the media industry, which relies heavily on trust and relationships with consumers, news sources and advertisers.

So what business model works in media? Private ownership, public funding and non-profit status all have proven and enduring value. There is a limit to public funding, even partial. So let me focus on the privately owned and not-for-profit models, which offer flexible and scalable solutions.

One family, the Sulzbergers, still controls the most successful media company to emerge from the traditional newspaper industry, The New York Times Co. A similar model under the Graham family and now Amazon founder Jeff Bezos has kept The Washington Post Co. vibrant, strong, relevant and useful. Both of these national media companies are growing and, according to reports, have even gone into the red at the Washington Post lately to provide more and better coverage. Admirable.

Locally, the Seattle Times is owned by the Blethen family and the Minneapolis Star Tribune is owned by Glen Taylor. Both serve their communities and regions with journalism that matters. On the broadcast side, family-owned Hubbard Broadcasting of Minnesota and family-owned News-Press & Gazette Co. of Missouri operate television stations and other media properties where reporters, advertising salespeople and others excel in their work and improve their communities.

New, impactful nonprofit media models have developed over the past two decades as the industry has evolved. The Texas Tribune, ProPublica and the Kansas City Beacon are some examples.

So where does that leave CNN? I’ve been a long time viewer, but have no hope given the path her new owners have taken. Of course, they can always go back. But, like Tribune and Knight Ridder, they probably won’t.

Here’s what I hope to see as the nation drowns in a sea of ​​online information, much of it bad and some downright destructive: a new commitment from media owners, consumers and investors that long-term success term requires resources, support, patience and, yes, profits that will be less than what managers focused only on the bottom line might achieve temporarily. News media does not make widgets. He bears a special responsibility and a role of service in our communities and our nation.

This responsibility requires doing what is right in the long run, not just what could bring in quick money.

I might have been the “winner” 20 years ago when I sat outside for lunch with my MBA colleagues and compared profit margins. But two decades later, my old business is all but gone, and the Chicago area — and the media industry — is poorer because of it.

Rob Karwath
is Vice President of Aimclear, a marketing and communications company in Minnesota. He taught journalism and media management at the University of Kansas and worked for 27 years as a reporter, editor and business executive at the Chicago Tribune and the Duluth News Tribune, part of the former chain Knight Rider Inc.