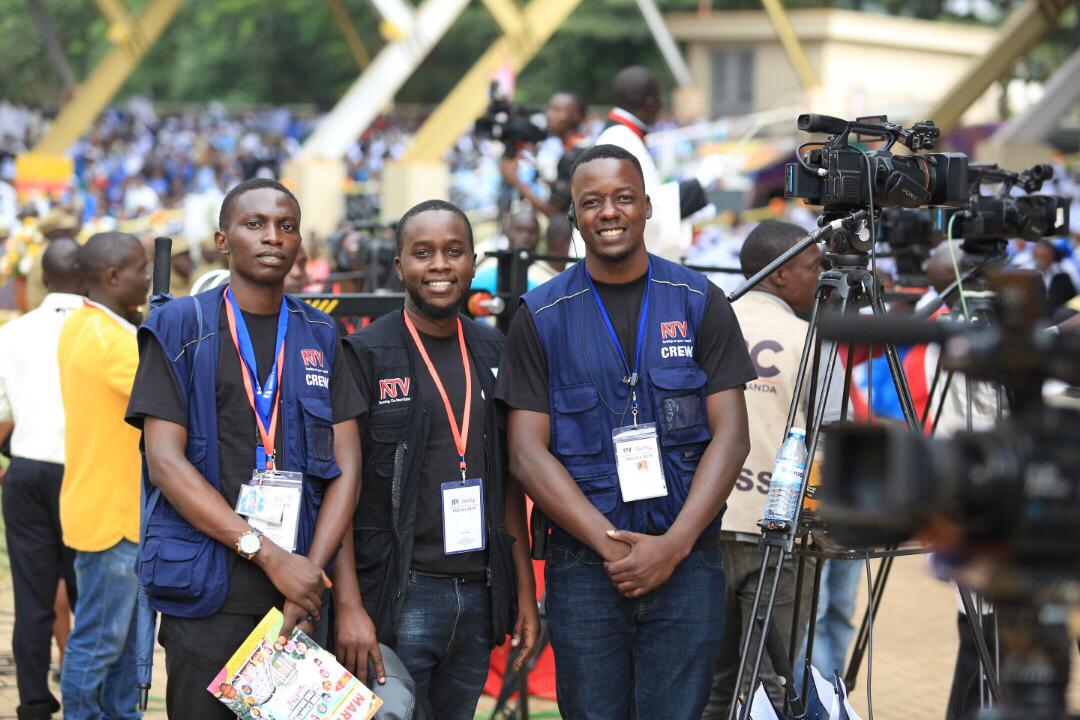 Every year there is a series of mandatory special LIVE SHOWCASES which Uganda-based TV houses are required to cover and air under broadcast policy or due to commercial demand.

THE PROBLEM:With over 100 TV channels today (some really questionable), there is an atmosphere of fierce and brutal competition for viewership, bragging rights and, most importantly, advertisers’ money. Which station is broadcasting the trending event? Who has the most credible access to the hottest news and influential politicians: especially presidential and parliamentary events as well as the five-year cycle of general and presidential elections. It’s a dogfight for numbers. With this overriding thirst to stay on top, most TV networks, newspapers, and radio stations will swarm all exclusive, high-security government events with reporters and camera crews, which equates to = CONGESTION + PAPER HIGH SECURITY RED + REDUNDANCY. Often soCONGESTED on a small platform, you’ll find more than 20 cameramen struggling to capture a similar shot of a dignitary speaking on the podium. By design, a bunch of them will either get a profile shot of the president or blurry shadows crossing from side to side and any cameraman knows this: framing kills or makes a shot. It’s so important in broadcasting and in terms of human resources, this way of working can cripple creativity and morale. Nevertheless, a skeptical mind might think, “It’s a competition. Whoever gets a better photo wins the audience. Let them fight. Well, I think that’s a “not beyond your nose” way of thinking for unpaid live specials. This elbow-to-elbow formula might work for impromptu interviews and press conferences, but a live 5-7am Liberation Day celebrations event at the Kololo ceremonial grounds isn’t ideal. It’s more intense and demanding for a non-rotating crew. The June 3 Martyr’s Day celebration is an example of how limited space and resources perhaps. Thousands of Christians and believers travel from all over the world and camp for days at the main Catholic shrines of Namugongo, Nakiyanja, Kigungu and Munyonyo and it’s safe to say that most TV channel production crews have to scatter their resources to make this day a success.

Dispatching teams to different locations to handle multi-camera live streaming (for naming inclusiveness purposes) looking for SNG/OB VAN setup space in a parked convoy of broadcast machines and uncomfortable pilgrims. It can really be a hectic that day. Moreover, the HIGH SECURITY RED TRANSLATION is a necessary evil but further frustrates the film crew on location. In this COVID era, crew members must obtain accreditation from government security agencies, a COVID test, and a thorough body and equipment search before entry (this can take hours), and when a crew start broadcasting LIVE, it’s been a mentally exhausting process. Security becomes a harder job as the numbers increase and sometimes tempers even soar with bruised egos when lists are whittled down and names inferred. Inevitably, this environment creates REDUNDANCY on the spot, whether it’s waiting for hours or duplicating each other’s work – there is no financial or human efficiency. It is a misguided oversight that media houses continue to hand over lists of hundreds of journalists and crew members for accreditation in order to secure an expected invitation to these events. ..but the fact is that all major media groups like NMG, VISION GROUP, NEXT MEDIA and UBC have one fundamental objective, which is “MAKE MONEY WITH LESS SPEND”.

Government and national holiday special live broadcasts are unpaid! It’s a necessary investment to retain viewership, bragging rights and credibility. Compared to the resources available to each of these TV stations, it is becoming increasingly expensive to cover multiple non-direct live commercial broadcasts without compromising product quality and output. THE SOLUTION:Rotation JOINT LIVE BROADCASTS, a scenario where the main players share resources to produce the major events of the calendar or each station takes one or two and shares its own stream with the other partners. This can save time and resources and in doing so foster productive synergies for the media industry as a whole. Currently, it’s done in an “unofficially, let me do you a favor” way, but it needs to take center stage and become the norm among competing TV stations. UBC is Switzerland in this media network. (a wink at you) With a single ‘live broadcast team’ mobilized by the ‘big boys’, the quality and efficiency of picture and execution will be improved immensely. Each station can bring forward its strongest resource and a work environment of shared skills is never bad. Some sort of committee may be agreed to always organize and check the bad apples, but in future the egos must be put in the back room and left there. Security would not have to deal with large numbers, on the other hand, less congestion can improve operations while eliminating redundancy in the process. This has more advantages than disadvantages. A standardized and uniform distribution would be in the interest of the organizers. THE CHALLENGE:Getting these chess players to agree on a collaboration might seem possible, but usually two bulls never stay in a kraal. I hope for the best. About me: I’ve been working in the media industry for over ten years now and I’m grateful to have had the experience, met people and gained some life along the way. Thank you for reading this blog and now please share with a friend and leave a comment, to continue the conversation. See you next time. Edris Matu SegawaWriter and ProducerNTV Uganda MASKIO FILMS mobile: +2567 00 342 297