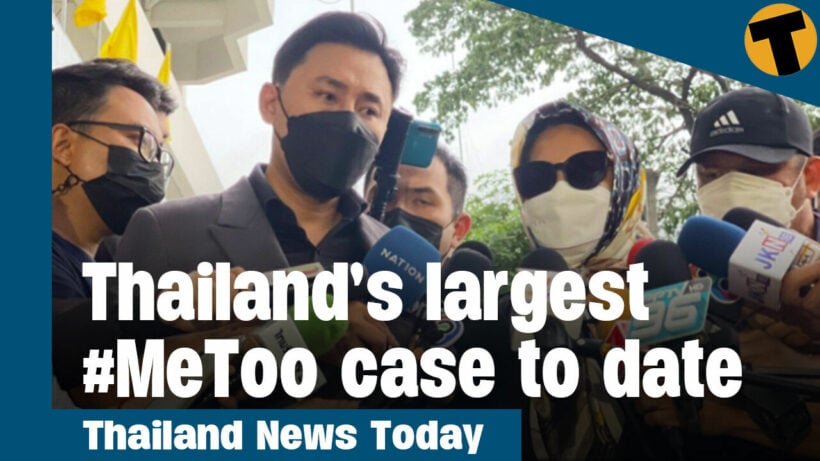 3 other women have broken their silence, adding to allegations of one of Thailand’s biggest sex scandals involving a senior politician.

Attorney Sittra escorted the three women to file reports while telling reporters there were others who had not yet spoken. According to Sittra, one of the accusers is a 26-year-old woman who gave the lawyer an audio clip on Sunday, which has since been released publicly. She claims that Prinn raped her in 2020.

The lawyer said: ‘She claimed the suspect had offered money in exchange for his silence, but she stopped receiving money.’
Another accuser, Sittra said, is a 21-year-old woman who claims Prinn sexually assaulted her when she was an intern. The alleged attack happened in a car in 2019 when she was 17. Another woman claims Prinn also sexually assaulted her, but she has not consented to release details of her ordeal to the public.

Sittra said that in addition to the three, four other women were unavailable to join him on Monday to file their complaints. Most of the women say they were tricked into having dinner with Prinn before he attacked them. One woman even claims that Prinn drugged her. Meanwhile, another woman who is in the UK plans to come forward as a witness.

Monday’s allegations bring to eight the number of women who have formally filed complaints. Three women had already filed a complaint with the police in Lumphini, another in Phetchaburi and another in Chiang Mai. However, Thai media reports that there are already more accusers. Notably, Channel 3 released a report with the profiles of 14 alleged victims who have so far filed police complaints against Prinn.

On Sunday, Bangkok’s Southern Criminal Court detained Prinn on three counts of sexual assault and harassment, before temporarily releasing him on bail on the condition that he not leave the country. Thai feminist groups banded together to stage a protest outside the Democratic Party headquarters in Bangkok yesterday morning following growing allegations against the politician.

Regarding the first complaint from an 18-year-old woman whose name has not been released, police say they collected enough evidence from a hotel in Bangkok’s Watthana district, where the alleged attack took place . Accompanied by her mother, the young woman filed a complaint with the police last week, opening the door for others to come out of obscurity in what could be Thailand’s biggest #MeToo case to date.

Thailand’s Department of Disaster Prevention and Mitigation – or DDPM – announced on Monday that the total number of traffic accidents and fatalities during last week’s “seven dangerous days of Songkran” had actually decreased, compared to the average of the last three years, even if the number of deaths this year had increased.

According to a summary of data from the DDPM, from April 11 to 17, there were 1,917 accidents, 1,869 injuries and 278 deaths in total. The main causes of accidents were speeding, at almost 41%, and drink-driving, at almost 22%. Motorcycles were the vehicle most frequently involved in reported traffic accidents.

DDPM Director General บุญธรรม เลิศสุขีเกษม said statistics and information will be further analyzed to prevent traffic accidents in the future, adding that the country’s goal is to reduce the death rate from traffic accident at only 12 deaths per 100,000 inhabitants. people by 2027.

Let’s continue like this with all the good news on the Covid. A prominent Thai virologist took to Facebook to reassure people that the virus does not destroy the immune system like HIV does.

According to Dr. Anan, the Covid-19 virus affects T cells in the same way as HIV, but the results of the two scenarios are completely different.
The virologist from the National Center for Genetic Engineering and Biotechnology relies on a study from the online journal Nature to illustrate his point. The study found that infected T cells destroy themselves, leading to a drop in the number of white blood cells. In the same study, the Covid-19 virus was found to infect activated T cells via a protein receptor.

However, the difference between Covid-19 and HIV is the lifespan of infected cells. Covid-19 kills T cells, which means very few viruses can reproduce. In the case of HIV, the virus is able to use T cells to help it replicate.

The Dr concluded that “since SARS-CoV-2 causes infected T cells to die without multiplying and the RNA of the virus does not mix with the DNA of the host cell, SARS-CoV-2 does not can’t create acquired immunodeficiency syndrome or AIDS like HIV yes.

———
The leader of a rebel group in Thailand’s deep south says the rebels will not engage in peace talks with the Thai government if the possibility of independence in Thailand’s southern border region is ruled out . Under Thailand’s current constitution, the kingdom remains indivisible.

The group’s leader, Kasturi Makhota, made the announcement days after his rebel group, the Patani United Liberation Organization – or PULO – took responsibility for a double bombing in Pattani that killed a fisherman and seriously injured demining agents. The attack broke out on day 40

The Ramadan/Songkran ceasefire in the region was agreed to by the Thai government and the Barisan Revolusi Nasional, which is the most active rebel group in the conflict.

The situation highlights the divergence of the claims of the rebel groups. Separatist groups have historically fought for the independence of the historic region of the Patani Kingdom, which today covers Pattani, Yala, Narathiwat and parts of Songkhla province. However, the BRN is happy to negotiate with Thailand under the modern constitution under which division is not possible, suggesting the group’s hopes for the region may have changed.

Metabolism The Thai government says it speaks informally to all rebel groups in the Deep South. However, two members of the Thai military said it was too early to say whether PULO would be invited to the next round of peace talks to be held in Malaysia.

In a rare comment, Myanmar’s former leader Aung San Suu Kyi called on the Burmese people to unite to stand trial and face life in prison.

According to a Reuters report, the comments were confirmed by a source familiar with Suu Kyi’s legal proceedings. Suu Kyi, along with the democratically elected government, was overthrown in a military coup on February 1 last year.

The former leader is now on trial, charged with breaking a state secrets law, multiple fabricated corruption charges and a range of other offences. In total, the charges carry a combined maximum prison sentence of over 150 years. According to a Reuters source, Suu Kyi urges the Burmese people to unite and continue dialogue with each other…

According to the Reuters report, the unnamed source is not drawn to Suu Kyi’s reasons for calling for unity, but insists it is not a call to engage in talks with the junta Burmese. There was no comment from the military on this.

The source reports that a verdict is expected next week on a bribery charge that accuses Suu Kyi of accepting bribes in gold and cash. She denied the charge. Last year, she was found guilty of several crimes, in a trial that took place behind closed doors and led by the army. Prior to the coup, she had been condemned by the international community for the persecution of Rohingya Muslims in Myanmar.

After the military coup ousted Suu Kyi and her democratically elected government, the United Nations and various rights groups accused the junta of committing atrocities against Burmese people. The army denies these allegations.

Subscribe or join our YouTube channel today and become a Thaiger Legend or Thaiger Cub for behind-the-scenes footage and other members-only benefits.