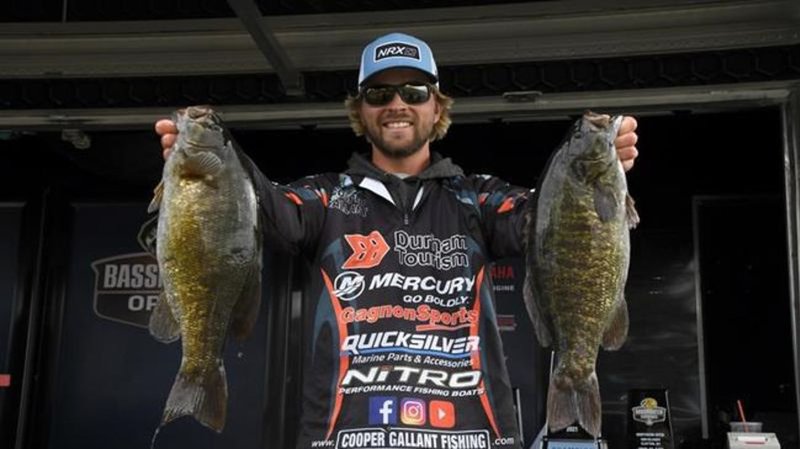 His go-to approach was a drop shot rig with an XZone hotshot minnow he cast to fish that he first found on his Garmin LiveScope electronics.

“The practice was super high and low, so coming here and getting a top 10 was my goal,” Gallant said. “I caught them with the same bait I used on Cherokee.

“I was LiveScoping and dropping it on their heads.”

A drop shot rig consists of a line attached to a hook with a leader that has a weight attached to the end. When the presentation is cast, the weight goes to the bottom with the hook and the weight above and within striking distance of the fish.

Saturday’s event is one of nine Opens held this year across three divisions (Central-North and South) that anglers can enter to secure a spot in the Bassmaster Elite Series, which is the premier fishing series in professional bass. Gallant’s plan this year is to play in all nine tournaments to become the fourth full-time Canadian in the Elite Series.

Gallant is aiming to join Cory Johnston, of Cavan, Ont., his brother, Chris, of Peterborough, Ont., and Jeff Gustafson, of Kenora, Ont., in the Elite Series next year. Dave Mercer of Port Perry, Ontario, the entertaining host of Dave Mercer’s Facts of Fishing TV show, is also emcee at Elite Series competitions.

Gallant’s win in April qualified him for the ’23 Bassmaster Classic, the first and richest event on the circuit ($1 million) to be held March 24-26 at the Tennessee River.

The Johnstons and Gustafson have all competed in the last three Classics. Chris Johnston finished fifth in the 22 event at Santee Cooper Lakes in South Carolina, the best finish ever by a Canadian.

Gallant is certainly within shot of a spot in the Elite Series as he is currently second overall in the Open with 807 points, just 19 points behind American John Soukup. The top three in each division as well as the overall standings qualify for the Elite Series.

Gallant is coming off a successful 21 season that saw him win the Competitive Sport Fishing League (CSFL) Canadian Open on Lake Simcoe. He and Danny McGarry of Newtonville, Ont., then won a CSFL team event at Rice Lake before Gallant returned to compete in a Shootout Fishing League tournament there.

In September he led the Bassmaster Northern Open in St. Lawrence River/1000 Islands before the final day. Gallant finished fourth as Cory Johnston took the win.

This report from The Canadian Press was first published on July 9, 2022.