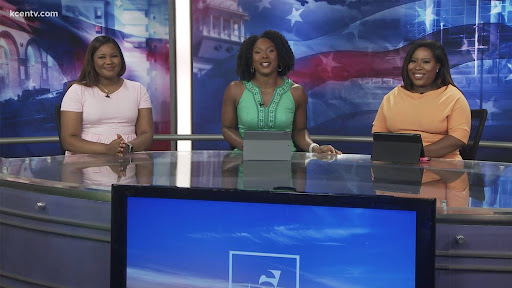 A local news station in Texas has launched what are believed to be the first all-black female news anchors on a major network in the country.

the historical trio sat down with KCEN Senior Producer Crystal Pratt to discuss the historic change and what it means for them individually.

“When I came to KCEN in 2017, we didn’t have African American anchors. It was completely different,” said Texas today Anchor Jasmine Caldwell.

“I just think back to when I was a young girl and I watched the news with my parents and I never saw anyone who looked like me,” said Texas today Anchor Taheshah Moise. “If I did, they were outside reporting in the cold.”

Those who view the historic trio as some sort of publicity stunt are going to have a rude awakening.

“I think what I feared the most was that people would downplay our talents to try to say this team was put together so this station could look more diverse,” said Texas today Meteorologist Ashley Carter.

“I think it’s important to know when people look at us every morning, they’ll be could see that each of us has earned our place on this team. I don’t think our news director did it intentionally. I think he just realized they’re all female and they’re all black, but hey, they’re the best for this show, and that’s what we’re going to do.

2022-05-13
Previous Post: A show hosted by three black women on this Texas news station illustrates what representation looks like
Next Post: Louisiana lawmakers back out of classifying abortion as homicide